The K-PAX Racing Bentley co-driven by Rodrigo Baptista and Maxime Soulet topped the charts in the first race of the Blancpain GT World Challenge at Circuit of The Americas, taking overall and Pro class honors.

An early full-course yellow as the result of a David Askew/Ryan Dalziel Mercedes-AMG GT3 off track led to a red flag as officials ensured the track conditions were clear. On the restart, a battle quickly developed between the No. 3 Baptista/Soulet Bentley Continental GT3 and the No. 22 Alegra Motorsports Porsche 911 GT3 R driven by Daniel Morad and Michael De Quesada.

The sister No. 9 K-PAX Racing Bentley of Andy Soucek and Alvaro Parente, which had jumped into a solid lead at the start of the race, slipped back after the restart, forced to watch as their teammates pulled ahead to score the first-ever win for the second-generation Bentley Continental GT3.

The Pro/Am class winner was the TR3 Racing Ferrari 488 GT3 driven by Jeff Segal and Wei Lu, the pair carrying over their successful partnership from 2018.

Round two of the Blancpain GT World Challenge America series starts Sunday at 2:10 pm CST. All races are livestreamed at http://stream.world-challenge.com/. 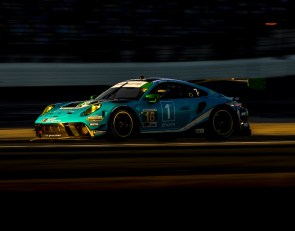