Charles Leclerc showed more of Ferrari’s potential with the fastest time of testing as Pierre Gasly suffered his second crash of pre-season in Barcelona.

During a busy morning session that saw lap times tumbling as numerous teams carried out qualifying simulation runs, Leclerc posted a 1m16.231s on the softest tire compound to lead the field by over 0.6s. Leclerc’s lap was just 0.058s off the pole position time from last season’s Spanish Grand Prix, although track conditions and being able to use a different tire makes it a somewhat unfair comparison.

Not only was the lap time encouraging for Ferrari, so too was the mileage as the team bounced back from Sebastian Vettel’s heavy crash on Wednesday to complete 138 laps. Ferrari discovered a rim failure was to blame for the Vettel incident, while the one stoppage for Leclerc came with 20 minutes remaining as part of a fuel run out test.

That late stoppage was the third red flag of the day, and the first was far more dramatic. Gasly lost control of his Red Bull early on turn in at Turn 9 — the high-speed right hander — and swapped ends, going backwards over the gravel and into the barrier.

The heavy contact severely damaged the rear end of the car while the front wing also broke off, and Red Bull’s day ended after just 65 laps. It was Gasly’s second crash of pre-season, having damaged the RB15 by going off at Turn 12 in the opening week, an incident that required a power unit change as a result.

Gasly ended up fourth, 0.007s slower than Lando Norris as McLaren’s encouraging pre-season continued on the penultimate day. Norris posted a 1m17.084s — just over 0.8s slower than Leclerc — but was also limited on mileage and only completed 84 laps.

Norris was one of three rookies to complete their testing program on Thursday, and another one of those — Alexander Albon — had a strong end to his running. Albon was the only other driver to dip under the 1m17s mark, posting a 1m16.882s and completing 118 laps as Toro Rosso led the midfield.

Albon’s lap time suggests there is more pace to come from Red Bull, given the fact that all of the top eight drivers used the softest C5 tire compound to set their best laps.

Similarly there was no comparison from Mercedes against the Ferrari lap, with Lewis Hamilton completing 85 laps in the morning before handing over to Valtteri Bottas to complete a race simulation after lunch. Though red flags interrupted the race run, Bottas nearly hit a century of laps in the afternoon, but his lack of a qualifying simulation left him with the slowest time.

Daniel Ricciardo in fifth was the highest-placed driver to set their best lap in the afternoon, posting a 1m17.204s. Renault focused on short runs on the softest two tire compounds — as many teams did — with Nico Hulkenberg driving in the morning and ending up a little under 0.3s off his teammate in sixth.

The morning session was uninterrupted, with all three stoppages coming after lunch. Lance Stroll caused the second of those three when he pulled to the side of the track exiting Turn 9 with a little over an hour remaining, but he still completed 103 laps with a best lap of 1m17.556s. This represented solid pace for Racing Point given the team’s plan to introduce a major upgrade ahead of Melbourne.

Alfa Romeo had a day of relatively low mileage, with a number of small issues interrupting Antonio Giovinazzi’s final day in the car. The team completed 71 laps, with Giovinazzi’s qualifying simulation leaving him eighth at the end of the day 1.4s adrift of Leclerc.

Haas also struggled for track time as it split its running between Kevin Magnussen and Romain Grosjean for the final two days. Magnussen managed 53 laps before the lunch break but his time of 1m18.199s came on the C3 compound, before a long delay when swapping drivers. Grosjean was only able to hit the track for the first time in the final hour due to Stroll’s stoppage, and after running wide at Turn 12 — recovering from the gravel — he only added 16 laps to the total and ended up ninth behind Giovinazzi on a 1m17.854s.

Williams continued with its recovery program as George Russell managed the highest individual mileage with 140 laps. It was crucial track time for the 2018 Formula 2 champion as he will not drive again before Melbourne, and a best lap of 1m18.130s represented an improvement of over a second for the team compared to Wednesday. 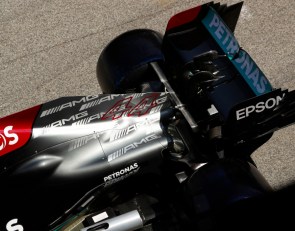