Jagger Jones, the 16-year-old grandson of 1963 Indy 500 winner Parnelli Jones, is making his move from the NASCAR Whelen All-American Late Models to the NASCAR K&N Pro Series West. Jagger will pilot the No. 6 Ford for championship-winning Sunrise Ford Racing, owned by Bob Bruncati. Jagger will be guided by Stock Car Hall of Fame Driver Bill Sedgwick as his crew chief.

In 2018, Jagger clinched the Kern County Raceway NASCAR Whelen All-American Late Model Championship with five wins at the half-mile banked track. He also had a total of 10 wins and podium finishes at Lake Havasu Speedway and Irwindale Speedway in only his second year as a late model driver. Jagger ran three East Coast races for Dale Earnhardt Jr. at JR Motorsports in the No. 88 late model car, winning the race at Myrtle Beach Speedway.

Jagger started his late model career in 2017 at age 14, winning NASCAR’s California 2017 Rookie of the Year. Prior to 2017, Jagger’s experience included racing go-karts across the United States and Europe.

“I’m really looking forward to a new car, and the 2019 season with Sunrise Ford Racing,” Jones said. “This year’s schedule includes such an amazing variety of tracks. From the dirt track in Las Vegas, the road course at Sonoma Raceway on a NASCAR Cup weekend, to short tracks like Kern and Irwindale, Iowa and Gateway on IndyCar race weekends, and then racing at my hometown track at ISM Raceway. I can’t wait for this season to begin. I’m going to do my best to use my experience to win some races. I want to thank Bob Bruncati, XYO, and all of my supporters for this great opportunity.”

The No. 6 Ford will be sponsored by XYO Network, blockchain’s first oracle that enables the virtual world to request cryptographically-secured data such as location data, audio data, temperature, video and more. Additional sponsors include Method Race Wheels, which designs, develops and distributes high performance wheels and accessories for race and street applications, and EZ Cut CNC, industry leaders in plasma cutting systems for custom metal fabricators. 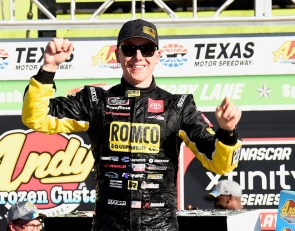