A relatively clean Hour 10 of Rolex 24 racing was ruined with 56 minutes completed as the No. 6 Acura Team Penske ARX-05 driven by Simon Pagenaud flew off of Turn 5 in the infield while running second overall. Although unconfirmed at the time of the incident, in-car footage from the No. 19 Moorespeed Audi R8 featured the sound of being hit from behind, which sent the GTD car off the circuit just ahead of Pagenaud.

The Frenchman gathered the car after a lengthy trip across the grass and returned to the circuit with most of the right-front bodywork torn away from the nose. He pitted at the end of the lap which, to his advantage, was within the No. 6’s pit stop window. The Penske team affected repairs and dispatched Pagenaud where he resumed in fifth place.

Teammate Helio Castroneves maintained the lead as the clock hit the end of the hour, Wayne Taylor Racing’s Cadillac DPi-V.R was eight seconds arrears in second as Renger van der Zande prepared to pit, and Action Express Racing’s Eric Curran was 26.8 seconds behind Castroneves in his Cadillac.

GTD featured the GRT Grasser Racing Team and its No. 11 Lamborghini Huracan GT3 with a 27.2 second lead over the No. 8 Starworks Motorsport Audi R8 LMS GT3 and the No. 44 Magnus Racing Lamborghini, which sat 51.3 seconds back from the leader. 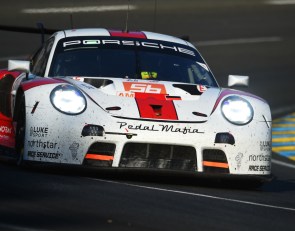 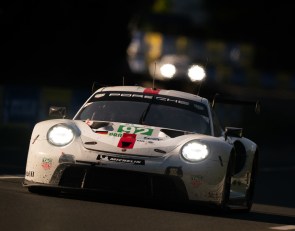 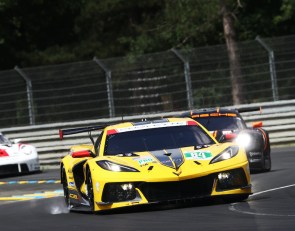