A wide array of storylines pushed November into record territory for audience traffic, making it the most visited November in RACER.com history. Over 351,000 unique visitors read stories on RACER.com to surpass November 2017 by 20.4%. As a result, RACER.com has topped 3 million annual visitors for the first time ever, with a month still remaining in the year.

Leading stories for the month included multiple headlines related to two-time World Champion Fernando Alonso who put a hold on his Formula 1 career, and announced his return to both the Indianapolis 500 and the Rolex 24 At Daytona in 2019, as well as his ride swap with NASCAR star Jimmie Johnson. The Baja 1000 made a few headlines with Alexander Rossi’s harrowing near miss on course, and Cameron Steele finally winning his first overall. Danica Patrick piqued everyone’s interest by dishing a little insight on the differences between life in the IndyCar paddock versus the NASCAR garages.

Thanks to all of those stories and more, a total of 2,057,020 pages were viewed for the month, representing a 10.7% gain from November 2017. New users continued to trend upward as well, with nearly 50,000 discovering RACER.com for the first time.

U.S.-based users accounted for majority of audience traffic, followed by Canada, Australia and Brazil. Note that E.U. users are not currently being counted due to regulatory issues with GDPR requirements. All metrics quoted are based on Google Analytics. Alexa.com certified traffic does include users within the E.U., and based on their metric, total traffic for the month was 388,610 with the U.K., Netherlands, Norway and Germany all coming in ahead of Brazil. That represents an additional 37,600 users, increasing overall growth by nearly another 11%. 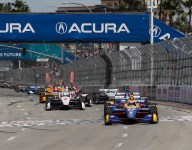