The 6 Hours of Shanghai got underway with Free Practice 1 and prior to that, an LMP1 Michelin tire test. In FP1, Toyota ran fastest overall, with another 1-2 finish in the timings with light rain coming down over the Shanghai International Circuit.

The fastest of the two TS050 HYBRIDs, which are the only cars in the field that have experience racing on the Chinese circuit, was the No. 8, Sebastien Buemi setting a 1m54.768s late in the session to go 1.5 seconds faster than the sister car which slotted in second with a 1m56.354s from Jose Maria Lopez.

Before the Toyotas took control at the head of the field, two privateer LMP1s traded fast times at the top: SMP’s No. 17 BR1 and Rebellion Racing’s No. 3 R-13. However, with the conditions improving, the two Toyotas came to the fore, and by a considerable margin, the No. 17 eventually ending up third and 4.1 seconds off Buemi’s time and the No. 4 4.3 off, falling to fifth after ByKolles’ CLM climbed to fourth courtesy of a late 1m58.919s by Tom Dillman.

Further down the order, DragonSpeed’s BR1 lagged behind, completing just five laps due to a sensor issue. This leaves the American outfit behind the curve, particularly because it sat out the tire test, while the rest of the field turned laps. Its car’s best tour was a 2:m06.847s, putting it at the very bottom of the LMP standings, and only three seconds quicker than the fastest of the GTE class cars.

In LMP2, the No. 37 Jackie Chan DC Racing ORECA 07 which won last time out at Fuji topped the class, with a 2m02.923s, six tenths clear of the No. 29 Racing Team Nederland Dallara which set the pace early on in the class. Third was the TDS Racing ORECA.

GTE Pro, meanwhile, was led by the No. 81 MTEK BMW, Martin Tomczyk reeling off a 2m09.830s to go 2.4 seconds faster than the other GTE Pro runners.

Second in the GTE ranks wasn’t a Pro car — TF Sport’s Am Aston Martin Vantage, which due to the conditions was able to set times faster than most of the Pros. Charlie Eastwood set the Vantage’s best time at the end of the session, a 2m11.764s. This meant that second in Pro fell to third overall in GTE, the No.91 Porsche which finished up with a 2m12.202s from Richard Lietz.

Behind, making it three marques in the top three was the No. 97 Aston Martin Racing Vantage AMR. Corvette Racing’s guest-entered C7.R, ended up in seventh in class with a best lap of 2m13.182s after 30 tours of the circuit during the 90 minutes of running.

Completing the top three in GTE Am was the No. 77 Dempsey Proton Porsche with a 2m17.432s, and the Clearwater Ferrari which leap up from last in class to third with a 2:13.683 from Keita Sawa just before he checkered flag came out.

Prior to FP1, seven of the eight LMP1 cars headed out on track for the aforementioned Michelin tire test, though it didn’t go to plan. Due to the conditions being poor, with light rain all morning, the intended testing an analysis didn’t take place.

Originally, the plan was to provide the privateers to sample a range of compounds available from Michelin ahead of the WEC races next year, to assess whether the French constructor needed to undergo any further development work.

Michelin spoke to RACER, and made it clear that it has designed tires specifically for the privateer non-hybrid runners. However, those were developed in a short space of time and were not tested extensively prior to the start of the ‘Super Season’.

Andre Lotterer ran fastest in the test with a 1m57.812s in the No. 1 Rebellion R-13. DragonSpeed’s BR1 was the only car which didn’t head out, the team telling RACER that it didn’t feel the need to take part. 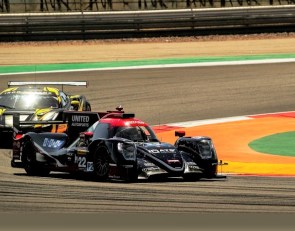