Hendrick Motorsports has a tradition after one of its drivers wins a Monster Energy NASCAR Cup Series race.

The Victory Bell is as it sounds — a bell mounted on a cart that can be pushed around the facilities at the team’s headquarters so each department can be acknowledged and celebrate the victory. Chase Elliott has been the only driver to put that tradition to use this year — three times in fact — and said after his latest gathering with the organization there is a lot of “fire” around the campus.

“If you can create fire and create some momentum and push from everyone around campus, I think that’s a big deal; I think it matters,” Elliott said Friday morning at Martinsville Speedway off his latest win.

“Every person that works there has a hand in what goes on … and if everybody that’s coming to work is ultimately building the car that’s sitting here in the garage has some fire and purpose, I think our performance will be better.”

Elliott won two of the three races in the Round of 12 to advance into the semifinal round. He is the only Hendrick driver still eligible for the championship after seven-time champion Jimmie Johnson was eliminated after the first round and Alex Bowman failed to advance last weekend in the Kansas cutoff race.

Elliott and the No. 9 team celebrate at Kansas Speedway. (Image by Rusty Jarrett/NKP/LAT)

With how well things have been going for Elliott, don’t look for things to change, such as HMS putting all its eggs in his basket. Elliott said he had not seen any shift in how the company is approaching his title hunt.

“I don’t really see that, I guess, day to day,” he said. “Honestly, I really don’t think our process or preparation or how things work in the shop has really changed. And I think if you changed that now you’d be disrupting our normal flow.”

Elliott is comfortable with how crew chief Alan Gustafson is leading the team and keeping the same routine regardless of the situation.

“I think the way Alan does things and the way he has his process set up throughout the week, from car builds to when the engine is put in the car to when the setup is done, I trust in that,” Elliott said.

“Our team does, and everybody that is involved in the 9 team does. So, I don’t think there is any need in changing that anyway. I think things for us will stay pretty status quo and we’ll see where it plays out.” 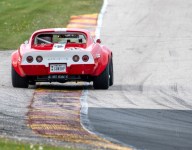 Qualifying and the first round of races were on tap for Saturday for SVRA’s Spring Vintage Festival at Road America. Fueled on an (…)