Jeb Burton spent a good portion of his Friday morning riveting his eyes into a simulator at Virginia International Raceway and it apparently paid off. The 26-year-old charger served notice he will be someone to watch in today’s SVRA American Racing Legends Charity Pro-Am presented by RACER Magazine. He laid down the fastest lap around the 3.27-mile, 18-turn course during afternoon practice. Burton gunned co-driver Debbie Cloud’s 1968 Camaro to record the fastest lap of the session at a 94.87 mph average.

Burton, the son of Daytona 500 winner Ward Burton, delivered a performance reminiscent of that by another 20-something, Matt Brabham, when he won the pole for SVRA’s other charity pro-am at the Indianapolis Motor Speedway in June. Brabham followed up that success by winning the race to sweep the weekend. All eyes will be on the young NASCAR veteran today.

Burton will face tough competition from Friday’s second-fast driver, Max Papis, in Curt Vogt’s 1966 Shelby Mustang GT350. Papis was seven tenths of a second off Burton’s pace and has used the SVRA platform to remind everyone he still lives up to his nickname, “Mad Max,” from years ago. Papis put on a dazzling display of car control in his runner-up pro-am drive at Indy and was in similar form at VIR as experimented with lines that included clipping the curbing at the Turn 3 apex, his left-front wheel clearly off the running surface. Co-driver Curt Vogt is one of SVRA’s fastest Group 6 drivers and regularly a tick quicker than Papis. That duo will be among today’s toughest customers.

Unlike Indy where the pros qualified the cars, the pro-am field will be determined by the best amateur lap in two qualifying sessions. The first session was held Friday and Dennis Olthoff gave co-driver and NASCAR Cup champion Bill Elliott something to smile about with the fastest Group 6 lap of the day. He set a pace 1.32 seconds faster than young Burton. Elliott was third fast in pro practice, making their 1970 Boss 302 Mustang a clear threat.

Other front-running pros with fast amateur co-drivers include Al Unser Jr., Greg Biffle, and Boris Said, who is partnered with Ray Evernham. Evernham, whose family foundation created the autism charity IGNITE, the beneficiary of the pro-am, was fourth fast among amateurs with a time that would have put him among the three quickest pros.

Deeper in the field, several pros struggled with unfamiliar cars and niggling problems. Both Willy T. Ribbs and Dorsey Schroeder endured frustrating fuel pick-up problems, causing their engines to falter. Schroeder has the only Ford Falcon in the race.

“We’re fighting with our carburetor,” Schroeder said. “We keep losing fuel pressure and on this kind of course where rhythm is so important, it makes the car very unstable. But I have to tell you we are having fun. We’ll get it fixed.”

Schroeder’s confidence was well placed as a late afternoon check-in found him smiling with a thumbs-up gesture. The former Trans Am champion was hands on along with the crew who had the 1964 vintage racer on jack stands as they transitioned from thrashing to due diligence inspection of every nut and bolt.

As for Ribbs, most of his issues came with sitting at the wheel of Jay Carley’s 1970 Camaro for the first time. The 1969 Corvette he had driven to the front in the last two Indy pro-am races was unavailable this weekend.

“For an initial shakedown, we were good other than some fuel pick-up issues at the entrance to turn one,” Ribbs said. “This car has a lot of grunt, but the approach to turn entry is a lot different than with the Corvette. A lot of the cars seem to be all over the track. I’ll predict tire management is going to be the big factor in the race.”

Former NASCAR Cup champion Bobby Labonte also puzzled over an unfamiliar car. He is partnered with Dave Handy in a 1965 Cobra, the only one in the race.

“Honestly, I’m just not used to an open cockpit car,” Labonte said. “The car feels unstable. It has lots of power, but it just doesn’t steer. I have to use up all the racetrack.”

In the spirit of vintage racing, Papis — an old friend of Labonte — stopped by to offer thoughts on getting comfortable with the air turbulence the NASCAR legend was encountering with the open cockpit. He suggested a trim to the windscreen, an idea that owner Handy will consider.

Today’s speed festival at VIR not only offers the much anticipated pro-am, but races for all four classes of professional Trans Am, vintage motorcycles, and the Mazda Heritage Cup race for first generation Miatas. Six feature races grouping several classes of vintage cars will run throughout the afternoon. There are 322 race cars on the grounds, an all-time VIR record. 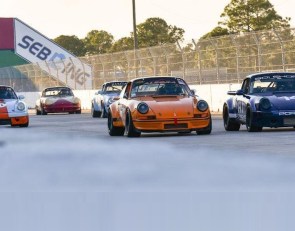 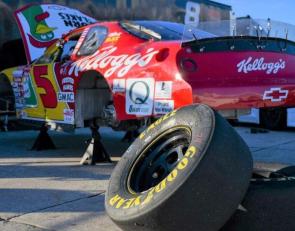 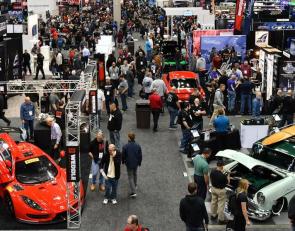