Hamilton went around the outside of Vettel at the Variante della Roggia — the second chicane — on the opening lap and the German hit the inside curb hard, pushing him into the sidepod of the Mercedes with light contact before spinning. With Vettel relegated to the back of the field it became a straight fight between Hamilton and polesitter Raikkonen for victory, but Valtteri Bottas played a crucial role.

After a Safety Car was required on the opening lap due to Brendon Hartley’s stricken Toro Rosso on the pit straight, Hamilton overtook Raikkonen on the restart before regaining the position around the outside of the Variante della Roggia. However, Raikkonen was unable to shake off the Briton’s attentions, and so Mercedes opted for a different strategy to attack later in the race.

Mercedes kept the championship leader out longer in the first stint than the Ferrari and dropped over five seconds adrift after finally pitting. However, with Bottas left out in the lead, Raikkonen was then held up for a number of laps, allowing Hamilton to close back up to his gearbox.

Once Bottas pit, Hamilton remained in close range and eventually managed to dive down the outside at the first chicane, holding the inside line at the exit to force his way past Raikkonen and into the lead.

Raikkonen was suffering with blistering on his left-rear tire and dropped away rapidly once overtaken, but still came home second, albeit nearly nine second adrift of Hamilton. “Disappointing, but nothing I could do on those tires,” the Finn said after the checkered flag.

Vettel complained Hamilton left him no room when they touched on the opening lap, and a front wing change left him at the back of the pack. Despite needing two pit stops, Vettel limited the damage with an excellent recovery drive to finish fifth on the road, pulling off a number of impressive overtakes, and was promoted to fourth due to a time penalty for Max Verstappen.

Bottas was attacking Verstappen after his pit stop and attempted to pass on the outside of the first chicane, but the Red Bull moved back across after defending the inside line and did not quite leave a car’s width. The contact was light but pushed Bottas off track and through the run-off area, leading to a five-second time penalty for Verstappen.

Although Verstappen — who was angered by the penalty — held Bottas off until the flag, the battle meant the pair only finished two seconds clear of Vettel and the Dutchman was relegated from third to fifth.

In a thrilling race, Romain Grosjean delivered a strong drive to a crucial sixth place for Haas as he held off the charge of Esteban Ocon and Sergio Perez in the final laps. Less than a second separated each of the three cars across the line, with Carlos Sainz a distant ninth and Lance Stroll picking up an impressive point for Williams in 10th.

Away from the tension of the fight at the front, there was no shortage of drama further down the field as Hartley was hit by a Sauber on the run to Turn 1 and a puncture damaged the right-front corner of his car, forcing him to retire instantly.

After the Safety Car period, Kevin Magnussen and Perez made contact at the first Lesmo, forcing the Haas driver to pit and leaving him a lap down.

Fernando Alonso was next to drop out as he limped back to the pits with a mechanical issue, before Daniel Ricciardo — charging through the field behind Vettel after starting from the back — pulled off with smoke coming from the rear of his Red Bull.

Ricciardo even had light contact with the man who will replace him at Red Bull next year — Pierre Gasly — on Lap 11 as the pair went wheel-to-wheel at Turn 1, passing the Toro Rosso a lap later as Gasly faded to finish 15th from ninth on the grid.

The victory is a crucial one for Hamilton on a track that Ferrari had expected to have the upper hand on, with the defending champion extending his lead in the standings to 30 points over Vettel.

In the constructors’ standings, Mercedes also pulls 25 points clear of Ferrari in the constructors’ championship, but Haas were the big winners as Grosjean’s sixth place moves the team level with Renault on 84 points, with the U.S. outfit now fourth in the standings due to having one fourth place to its name this season, scored by Grosjean in Austria.

Having failed to score in the opening eight rounds, the Frenchman has now picked up 35 points in the last six races. 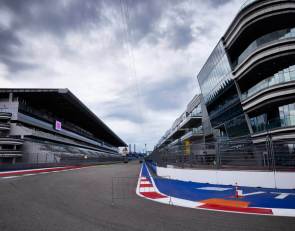 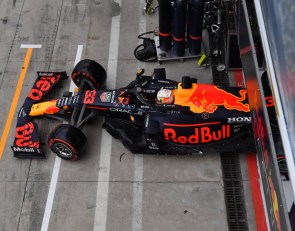