Toyota officially announced Thursday it would no longer be the title sponsor of the Toyota Grand Prix of Long Beach after a 44-year run and almost immediately Jim Michaelian’s phone began ringing.

“Since 9:30 this morning I’ve already had phone calls from four different entities regarding the title position, so I think there’s plenty of interest out there,” said Michaelian, the president and CEO of the Grand Prix Association of Long Beach who has been part of the legendary street race since its inception in 1975. “You have to remember we haven’t had to look for a title sponsor in 39 years and there’s a lot of companies out there today that weren’t even in existence when we started, so this gives us a chance to explore our options.”

The first decision would appear to be whether the title sponsorship of the IndyCar race weekend, which also features IMSA sports cars, Pirelli World Challenge, drifting and vintage cars and is set for April 12-14, 2019, will be packaged or sold separately.

“With Toyota they were the title and the automotive sponsor, so do we keep it as a package or have an entitlement partner and an official vehicle partner? Those are the options that we are currently exploring since Toyota let us know at this year’s race they wouldn’t be back. We’ve been talking to a lot of manufacturers since then.”

A logical choice would be Honda, which supplies more than half the IndyCar field and HPD’s headquarters is in nearby Santa Clarita.

“It’s been the most successful street race ever for four decades, so if the opportunity presented itself we’d have to take a look at it,” replied T.E. McHale, motorsports manager for American Honda, when asked if Honda was interested in replacing Toyota.

Michaelian said the timing of the announcement had a purpose.

“Our ticket renewals go out Monday and it won’t say Toyota for the first in four decades, so we wanted to get out in front of it,” he said. “But I’m confident we’ll have sponsorship by the time the race rolls around.” 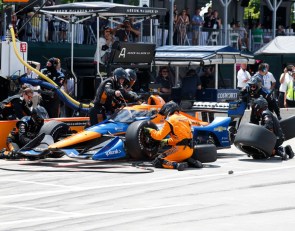