The executive director of the Baku City Circuit has dismissed rumors that the proposed addition of a race in Miami threatens the future of the Azerbaijan Grand Prix.

Following this year’s addition of the Azerbaijan race, the progression of plans to host a grand prix in Miami led to speculation that Baku would drop off the calendar to make space. Those rumors appeared to be fueled by talks with F1 to try and utilize the temporary garage and paddock structures in Baku at other venues, with a new street race likely to be interested in such an option.

However, when the suggestion that Miami’s arrival on the calendar could result in the loss of the race in Azerbaijan, BCC executive director Arif Rahimov insisted there was no such threat.

“I didn’t even discuss it with FOM because it just makes no sense,” Rahimov said. “We have a contract that is a binding contract for five years, five races, starting in 2016. Neither of us can break it unless we both agree to break it. On the other side, if Miami comes in, it can just come in and all the other races can stay there. It’s up to 22 races anyway.

“I think it was just a rumor. I don’t know how this rumor got spread, because it made no sense from the beginning. I guess they’re going to release the draft calendar this month or next month. We’re going to be in this calendar and it’s going to sort out most of the questions.”

Baku’s future is uncertain given the high race hosting fee it currently pays to F1, believed to be in the region of $50 million per year. With the original contract running until 2020 with the option for a further five years, when asked what sort of reduction he is looking for on that number to continue until 2025, Rahimov replied: “In general, we want to be closer to the average.

“You have a few outliers that you have to remove from both ends, but obviously we want to be closer in that mid-range of flyaway races. We cannot just take the average of all the races, because obviously the European races pay less for a lot of reasons, starting from logistics and cost of operations, etc.

“We do definitely want to be there in the average of the flyaway races, and that’s not the only thing that we’re discussing with FOM. It’s most of the other commercial terms in the contract too. They want to try the new approach too. It’s a bilateral effort to make this viable for all of us.”

Rahimov is confident a solution will be found with F1, with the original contract stating a break clause would need to be triggered at the end of June.

“We haven’t triggered the break clause. We’re negotiating on the second part of the contract. We all know that we need to improve bits. We’re really trying hard to make sure it’s good for us and Formula 1.

“Triggering the break clause… it’s not a risk. We might postpone the deadline for the negotiations. You can call it triggering a break clause, too. Basically, it’s a letter. There’s no format of a letter. You can write a letter saying that you want to renegotiate and you want to do it later. We’re trying to get it sorted before the end of June. I think we’ll come to some agreement.” 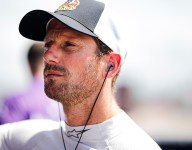