Michael Johnson putting Roar Before the Rolex 24 injuries behind him

Michael Johnson putting Roar Before the Rolex 24 injuries behind him

With more than five months in the calendar year already passed, for many it seems the days have flown by. For Michael Johnson, though, they’ve gone by slowly – painfully slowly.

Driving the No. 54 JDC-Miller Motorsports Audi RS3 LMS, Johnson and his co-driver Stephen Simpson planned to contest the full IMSA Continental Tire SportsCar Challenge season in the TCR class. Those plans changed during the Roar Before the Rolex 24 At Daytona test in early January.

Johnson – paralyzed from the waist down due to a motorcycle crash when he was 12 years old – was behind the wheel of the No. 54 during one of the Roar’s practice sessions when the car catapulted into the Turn 1 wall as he came onto the oval from the infield road course. As a result of the impact, Johnson suffered a broken right tibia and fibula.

Johnson’s injuries and the team’s preparations for a second car kept the JDC-Miller Motorsports team away from the Continental Tire Challenge paddock, but not for long.

“I’m feeling great,” said Johnson at Mid-Ohio earlier this month. “It’s good to be back. My body is 100 percent now. I’m all healed up, so it feels good.

“The recovery time was a little rough for the first couple months, just to get my body to get over what trauma had happened to it. The hardest part was not doing anything. I just had to be chill and not do any movements or move the leg around or anything. That was the hardest part, but I started to get better and better. I started training more and working out and then finally was able to get back in the car a couple weeks ago. It felt good. I didn’t have any hesitation or any doubt that I could do it, I could get back in.”

Johnson’s confidence in his recovery definitely carried over to his performance in the Continental Tire Challenge Mid-Ohio 120 on May 5. While the team ultimately finished fourth – tying his best finish in the series – Johnson powered his way to the front of the class, leading five laps before handing the car over to Simpson.

Those five laps marked the first time Johnson has led the field in his Continental Tire Challenge career.

“The race at Mid-Ohio went amazing,” said Johnson. “All the recovery and preparation really paid off. I’m proud I drove so well and the driving Stephen Simpson did as well. Leading my first laps in an IMSA-sanctioned race feels amazing and I can’t wait to do it again soon.”

Johnson will get another chance at a podium finish at Watkins Glen International on June 30. It’ll be a test of endurance, though, as the race will be the second of two, four-hour enduros on the series’ schedule this season.

Despite the adversity, there’s one thing Johnson has reiterated time and time again.

“It’s good to be back with JDC-Miller Motorsports,” said Johnson. “This group of people is really great. They all stuck with me and they got the second car put together and they definitely are a top-notch team.” 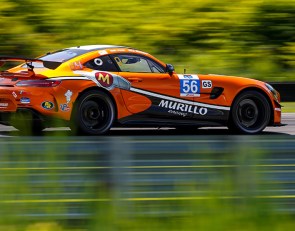 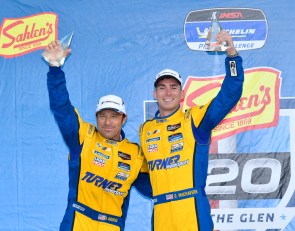 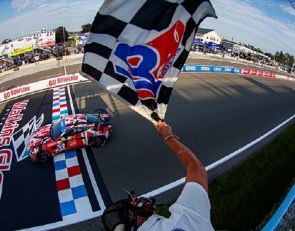