Alexander Rossi once again served as the benchmark for the rest of the IndyCar field at Long Beach on Sunday morning, setting fastest time in the final warm-up ahead of today’s race.

Rossi claimed P1 with a 1m07.5366s tour, putting him just 0.09s ahead of Ganassi’s Scott Dixon and Andretti Autosport teammate Ryan Hunter-Reay. Josef Newgarden, Simon Pagenaud and Will Power lined up for a Penske 4-5-6 immediately behind them.

A largely uneventful morning was interrupted by a brief red when Gabby Chaves spun and appeared to stall his Harding Racing Chevrolet at Turn 9, and again a short time later when Zachary Claman de Melo sailed his Coyne car into the run-off, bringing out the checkers a couple of minutes earlier than scheduled.

Elsewhere, Juncos’ mechanics were up late repairing Kyle Kaiser’s car after he crashed heavily in qualifying yesterday, but the Californian was able to repay their efforts with a busy morning’s work during which he completed more laps during the morning session than everyone other than Sebastien Bourdais, albeit with a best lap 1.8s down on Rossi’s time. 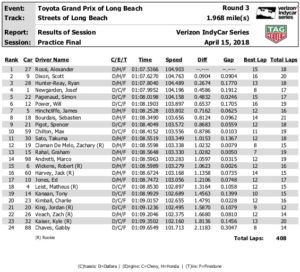