Daniel Ricciardo took a stunning victory in the Chinese Grand Prix as Red Bull took advantage of a Safety Car period to win a six-way fight.

On fresh soft tires, Ricciardo came through from sixth place to overtake all of the main championship contenders and win by 8.9 seconds from Valtteri Bottas. Having led after jumping Sebastian Vettel in the first round of pit stops, Bottas held off the charge of Kimi Raikkonen in the final laps, with Lewis Hamilton taking fourth as Max Verstappen – fourth on the road – dropped to fifth due to a time penalty.

Vettel was left in eighth place after contact with Verstappen took him out of third at the time, but Ricciardo’s win marked the first time Mercedes has gone three races without a win in the V6 turbo era.

Ferrari, Mercedes and Red Bull had been relatively closely matched but the top six were all spaced out when the two Toro Rossos collided to leave debris on the track and lead the Safety Car to be deployed. With Bottas leading Vettel and Verstappen at the time and the top two passing the pit lane, Red Bull responded immediately by pitting both drivers while the other two teams left their drivers out – Raikkonen having not long pitted for medium tires – and Verstappen was running fourth with Ricciardo sixth when the race restarted with 21 laps remaining.

The Red Bulls were soon the quickest cars on track, with Bottas leading Vettel but Hamilton in third having to defend from Verstappen. Ricciardo dispatched Raikkonen at the Turn 14 hairpin and then inherited fourth when Verstappen ran wide attacking the defending champion.

With 16 laps to run, Ricciardo showed his teammate how it’s done as he came from a long way back to pass Hamilton into Turn 14 and then used DRS to get ahead of Vettel on the run to the same corner two laps later. 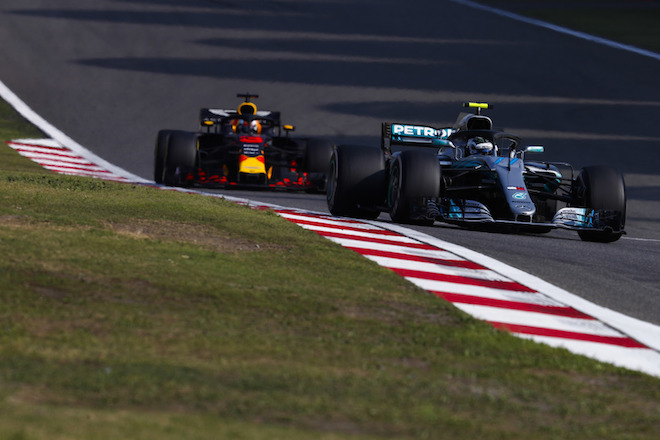 Bottas was still leading after a faultless race but Ricciardo – who had said he would have tried to pass Vettel for the lead on the final lap in Bahrain in Bottas’ shoes – pulled a breathtaking move at Turn 6 for the lead. Bottas moved late to cover but there was just a car’s width on the inside and Ricciardo took full advantage as the pair came perilously close to contact.

Just before that pass with 11 laps remaining, Verstappen’s race craft was again found wanting as he made a late move to the inside of Vettel at Turn 14 and hit the Ferrari, spinning both cars and dropping Vettel to seventh behind Nico Hulkenberg. That incident allowed Hamilton and Raikkonen ahead, with the Ferrari taking advantage to jump into third place.

Verstappen was given a 10-second time penalty for the collision – the same as Pierre Gasly was given for hitting Brendon Hartley in the incident that caused the Safety Car – but soon dispatched a struggling Hamilton once again at Turn 6 as he looked to minimize that penalty.

With Raikkonen on eight-lap fresher medium tires than Bottas, he closed on his fellow Finn for P2, with Verstappen joining the fight on track. Raikkonen was unable to get a move done, however, and Verstappen also held station to cross the line in fourth but drop behind Hamilton due to his penalty.

Ricciardo eased away to win by nearly 10 seconds, having nearly missed qualifying on Saturday when he suffered a turbo failure in FP3, and he again had his team to thank as the strategy played out perfectly. However, the Australian was the perfect blend of aggressiveness and precision to take advantage and move through the field. 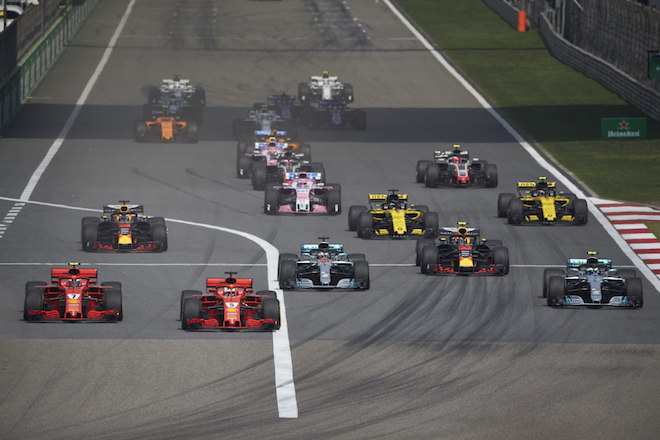 Vettel lit his rear tires when recovering from the spin with Verstappen and appeared to also be nursing a damaged car as he failed to stay with Hulkenberg in the closing laps, with Fernando Alonso hunting him down. With two laps to go, Alonso passed on the inside of Turn 1 and then forced the Ferrari off on the inside of Turn 2, moving up to seventh.

The championship leader ended up eighth, while Carlos Sainz came home ninth for Renault ahead of Kevin Magnussen in 10th. Both Renaults had also followed Red Bull in switch to soft tires under the Safety Car.

Vettel’s struggles saw him pick up just four points compared to 12 for Hamilton, seeing the championship lead cut to nine points, while Mercedes also moves one point clear of Ferrari in the constructors’ championship. Vettel had looked set to extend his advantage when he led a relatively dull first part of the race before pitting, with Bottas getting the undercut by pitting one lap earlier to turn around a 3.5-second deficit to take the lead before the intervention of the Safety Car.

Force India just missed out on points with Esteban Ocon 11th and Sergio Perez 12th, while Hartley was the only driver to retire after the contact with Gasly, leaving Charles Leclerc as the last of the finishers in 19th place after a spin at Turn 1. 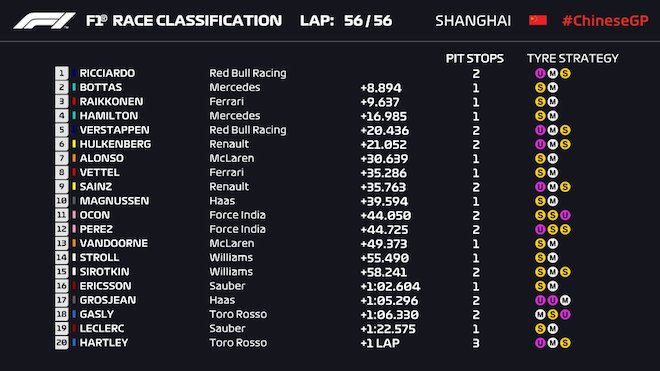 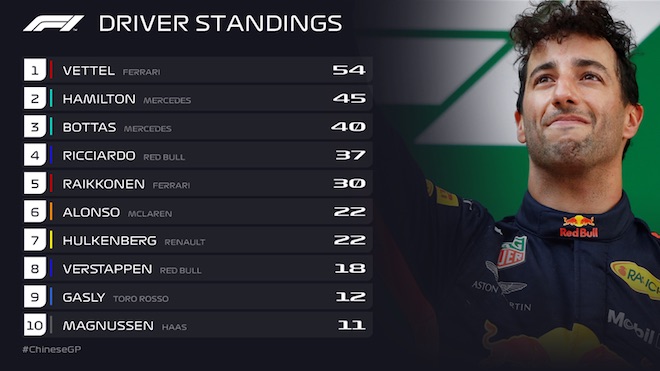