Valtteri Bottas believes he deserved to win the Chinese Grand Prix but says there was nothing Mercedes could have done to cover the threat of Red Bull.

With Sebastian Vettel leading by over three seconds, Bottas delivered an excellent in-lap and was similarly quick on his out-lap after Mercedes made an impressive pit stop that saw him jump the Ferrari. Bottas had then been able to keep Vettel outside of DRS range when a Safety Car period allowed the Red Bulls to switch to fresh soft tires, and Daniel Ricciardo duly climbed through when the race restarted to take a spectacular victory.

“The race was going pretty well for us and we were looking strong all the way, until the guys, during the Safety Car, stopped and we were in trouble then with Daniel and nearly with Kimi [Raikkonen] in the end,” Bottas said. “It is disappointing. We were giving everything we had and it kind of felt like we deserved victory… but not today.

“It felt like everything was under control [before the Safety Car]. I had no major drop-off in the end, so I think we could have done it – but this is racing, these things happen.”

Having started from third place, Bottas jumped Raikkonen at the first corner before getting ahead of Vettel but says it was too late for him to be able to pit when the Safety Car was deployed. 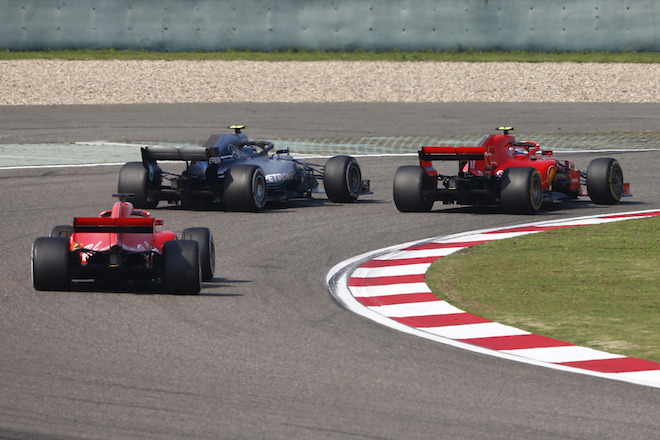 “Starting the race from the second row makes it more difficult. It’s a shame what happened in the end because we really took the opportunities in the beginning of the race start, during the pit stop. After the stop everything was going fine. And then with the Safety Car we just got a little bit unlucky – but that happens sometimes. It’s difficult to accept that quickly, after the race, but that’s F1.”

With the Mercedes leading until 11 laps from the end, Ricciardo still had to overtake Bottas on track for victory and the pair almost collided at Turn 6, but the Finn says he only pushed his defense so far due to the pace differential between the two cars.

“Obviously I saw him very close in Turns 1, 2, 3. He got a decent exit as well. He was closing lap after lap with pretty big gains.

“From my side there was not much to do. I tried to defend but ultimately, with the better tires, he could really brake quite a lot later and got inside. It was all fair. I think it was just a matter of time, with the pace he was going.”