Rossi’s 1m06.5528s was 0.3526s quicker than nearest threat Will Power – a larger gap than that covering the entire remaining Fast Six. His car speed was supplemented by some aggressive gamesmanship in pitlane to ensure that he got out ahead of the Penskes, but he said that he wasn’t entirely surprised by the final margin.

“Yes and no,” he said. “But track position is very important, and we were able to execute that.”

Simon Pagenaud will start from the second row alongside Scott Dixon, with Graham Rahal and Josef Newgarden rounding out the top six. The latter had his sights on starting a couple of rows further forward, but a brush with the wall put paid to that.

“I just ran out of talent momentarily,” the reigning champion admitted. “I was trying to maximize that first lap even though I knew the second lap was the one we needed to hit.”

On what was shaping up as a quick lap, this contact cost @josefnewgarden a chance at the @verizon P1 Award.

Disappointed as he was, Newgarden was still happier than Ryan Hunter-Reay, whose Fast Six ambitions were shot when he was penalized – unfairly, in his view – for an illegal pit exit, earning himself a drive-through penalty at a time when he needed to be leaning on a set of reds.

Also ruing what might have been was Robert Wickens, who failed to make it past the second round after touching the barriers.

“Just pushed a little too hard and brushed the wall at the exit of Turn 4,” he said. “But when you’re pushing on the limit to try to get to the Fast Six you risk everything, and we went a little too far with that one.”

Ganassi’s Ed Jones didn’t hit the wall, but a small error on what should have been his best lap proved just enough to shut him out of progressing from the first round.

“The reds came on really quickly, and I made a mistake on my best lap,” he said. “I did [my time] a lap too late.”

Juncos rookie Kyle Kaiser failed to register a time after clouting the wall early in the session. 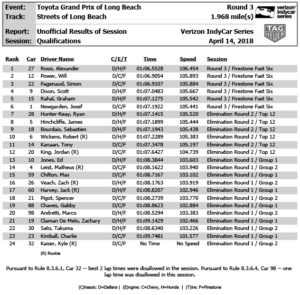