In cold and windy conditions in Shanghai, Vettel was able to master the tricky track conditions best to post a 1m33.018s to lead teammate Kimi Raikkonen by nearly half a second on Saturday morning. Of note was the gap to Mercedes, with Valtteri Bottas in third place but three quarters of a second away from Vettel’s pace on the ultrasoft tire.

Max Verstappen was fourth fastest for Red Bull but it was a frustrating session for the team as Ricciardo was forced to stop when his Tag Heuer-branded Renault power unit let go on the long back straight toward the end of the lap. Ricciardo informed his team of the problem but was unable to limp back to the pits, meaning Red Bull had to wait until 15 minutes from the end of the session to get the car back to begin a power unit change with a little over two hours before qualifying.

The issue follows a loss of power that forced Ricciardo out of the Bahrain Grand Prix on the second lap last weekend, with the Australian taking a new control electronics and energy store – his second of two for the season – as a result. Team principal Christian Horner later stated the issue appeared to have been with the turbo, but any damage to the internal combustion engine (ICE) remained to be seen.

Verstappen also complained of a loss of power as he reached high revs late in the session, but continued running as Red Bull didn’t look overly concerned by the complaint.

There was also a very scruffy session for defending champion Lewis Hamilton, as he made a number of mistakes and suffered a spectacular spin as he ended up fifth. Hamilton – who was quickest in both of Friday’s sessions – never looked comfortable on a track low on grip after heavy overnight rain, and ran wide at Turn 10, with wet astroturf on the corner exit pitching his car into a 540-degree spin.

Hamilton’s ultrasoft tire run left him sixth fastest overall, with the Mercedes appearing much less competitive in the cold conditions.

It was a different story at Haas, however, with Kevin Magnussen sixth quickest on the soft compound tire. Just 0.3s adrift of Hamilton, Magnussen led the tight midfield battle with the Force Indias of Sergio Perez and Esteban Ocon just 0.1s further back. Carlos Sainz and Sergey Sirotkin rounded out the top ten, with the Williams also looking stronger in the lower temperatures.

The two McLarens of Fernando Alonso and Stoffel Vandoorne were 12th and 13th respectively, with Ricciardo down in 15th after managing just four laps before his problem.

Not the kind of hot lap Romain Grosjean had in mind

The Red Bull driver wasn’t the only man to hit trouble, with Romain Grosjean spinning at Turn 9 after dipping his rear wheels on the wet astroturf and then suffering a rear brake fire that needed extinguishing in the pit lane and ended his running after six laps. 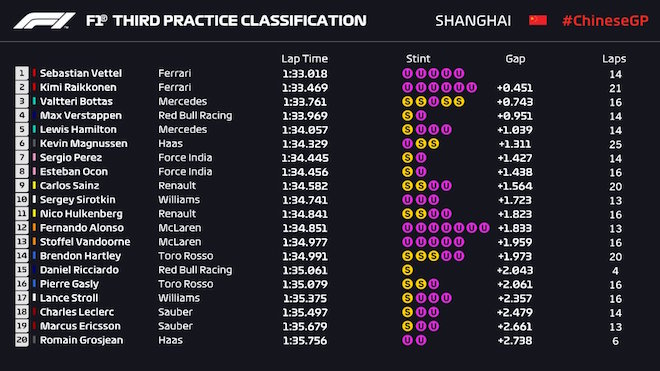 Off Road 4hr ago ET