In a repeat of last weekend’s qualifying session, Raikkonen had looked the quicker of the two Ferrari drivers throughout qualifying and held provisional pole after the first runs but Vettel pulled out an impressive final lap to snatch top spot by just 0.087s.

Once again it’s an all Ferrari front row and like Bahrain it was also Valtteri Bottas in third place as he looked more comfortable in his Mercedes throughout the weekend to beat Lewis Hamilton into fourth. Hamilton was only 0.05s adrift of his teammate but the gap to Ferrari was significant with Bottas over half a second slower than Vettel.

Red Bull locked out the third row after a tricky start to the day, with Daniel Ricciardo requiring a power unit change due to a suspected turbo failure late in Q3. An excellent effort to get the car ready to take part in qualifying was rewarded with sixth place – one position behind teammate Max Verstappen who was 0.121s off Hamilton – although both Red Bulls will start on the rapidly-degrading ultrasoft tire compared to the four cars ahead of it on the soft.

Nico Hulkenberg was best of the rest to take seventh place with another strong performance for Renault, beating the improving Force India of Sergio Perez by nearly a quarter of a second, while Carlos Sainz and Romain Grosjean rounded out the top 10.

Kevin Magnussen was the surprise of Q2 as he was eliminated in 11th place having looked so quick in practice, with teammate Grosjean comfortably advancing. A late final lap from Sainz got him through ahead of Magnussen, with Esteban Ocon also failing to advance in 12th place.

The second part of qualifying also marked the end of another difficult qualifying session for McLaren as Fernando Alonso and Stoffel Vandoorne could only manage 13th and 14th on the grid despite a slipstreaming effort along the long back straight. That at least left both cars ahead of the Toro Rossos, with Brendon Hartley nearly 0.3s off Vandoorne.

With the ultrasoft tire having been degrading quickly on high fuel on Friday, both Ferrari and Mercedes wanted to try and progress from Q2 on the soft tires. While both Vettel and Raikkonen comfortably did – with the Finn marginally quicker – Bottas was only fourth and Hamilton sixth after those runs, but a strong second attempt from both Mercedes drivers saw them end up with the fastest two times in Q2 and ensures all four will start on the softs.

Ricciardo faced a race against time to get out in Q1 and Red Bull did a brilliant job to send the Australian out with less than four minutes to go. Ricciardo only got one lap to progress and sneaked through by just 0.2s in 14th place, having a nervous wait to see if any of the drivers in the bottom five would jump ahead of him.

Hartley made it through in 15th place by just 0.049s ahead of Sergey Sirotkin, who narrowly missed out on a first Q2 appearance after a good performance. Pierre Gasly was the somewhat surprising elimination in 17th having been sixth in Bahrain, failing to pip his Toro Rosso teammate with his final lap. 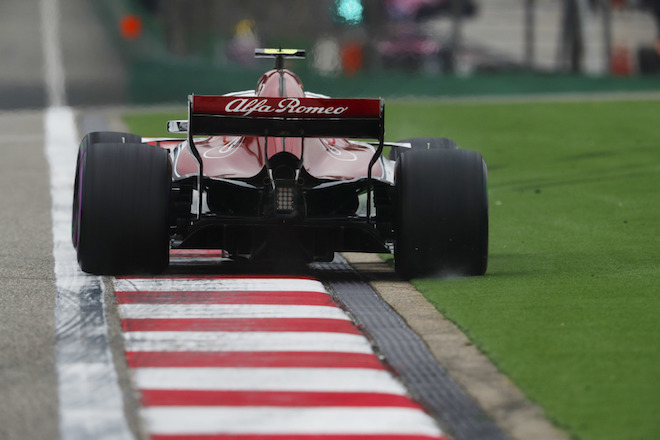 Lance Stroll was 18th for Williams – just over 0.2s slower than Sirotkin – while the two Saubers will make up the back row. Despite that, Charles Leclerc (pictured above) impressed to outqualify Marcus Ericsson for the first time, with the rookie recovering from a spectacular spin to do so. Exiting the final corner, Leclerc lost traction on wet artificial turf and had two attempts to catch the car before overcorrecting and pitching it into a spin toward the pit wall.

The incident happened at the exact same corner as Sauber replacement Antonio Giovinazzi crashed at last year, but on this occasion Leclerc managed to release the brakes and avoid the wall, allowing him to continue and then beat Ericsson by nearly half a second.

Ericsson was later hit with a five-place grid penalty – which has no actual impact on his starting position – and three penalty points for failing to slow for double waved yellow flags due to his teammate’s spin. 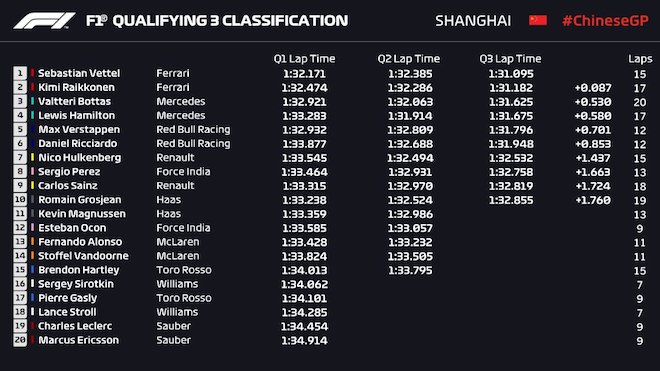