Lewis Hamilton set the pace in the opening practice session for the Chinese Grand Prix as Mercedes started the weekend strongly.

With Pirelli bringing the medium, soft and ultrasoft tires – a step in compound for the first time this season – the teams took different strategies to FP1 and Mercedes used the softs for its best laps, with Hamilton leading the way on a 1m33.999s. He was over 0.35s clear of Kimi Raikkonen at the end of the session as the Ferrari delivered a late improvement after a prolonged spell in the garage, with Raikkonen using the ultrasoft compound that is estimated to be a second a lap faster.

Hamilton’s session wasn’t without incident, however, with the defending champion spinning at Turn 11 as high winds made for tricky conditions on Friday morning in Shanghai.

Valtteri Bottas was third in other Mercedes after also using the soft compound tire, just under half a second off his teammate, with Daniel Ricciardo fourth for Red Bull but also using the ultrasofts as he ended up more than 0.5s off Hamilton’s pace. Ricciardo – who is using a new control electronics and energy store after his retirement in Bahrain, the second of two permitted for the season – did lose some time running wide at the final corner, but Red Bull will still be wary of the gap due to the tire difference.

Max Verstappen was one position lower than his teammate in fifth but had a big off-track moment at the final corner, clouting the apex curb and catching a snap of oversteer but sliding sideways through the gravel. Despite the off, Verstappen was able to set his personal best time on the next lap, suggesting there is more pace still to come.

A close call for Verstappen

The Red Bull driver goes off at the final corner, but avoids the barriers#F1 #ChineseGP pic.twitter.com/f6fQmv5BWK

Sebastian Vettel was sixth for Ferrari after also using ultrasofts, with much of the team’s radio talk centering around the strong wind that was making the car unstable. At over 0.8s off the pace Vettel was also half a second slower than his teammate, and only 0.3s clear of Kevin Magnussen in the Haas.

Carlos Sainz, Romain Grosjean and Nico Hulkenberg rounded out the top ten, with Haas and Renault both starting solidly ahead of the Toro Rosso of Pierre Gasly and the McLaren of Fernando Alonso.

The time suggested another tricky weekend for McLaren, with Alonso over two seconds off the pace and teammate Stoffel Vandoorne down in 18th place after going off at Turn 10. Similar to Verstappen, Vandoorne caught a snap of oversteer but was sent very wide as a result, bouncing through the gravel and needing to pit to have the car checked. 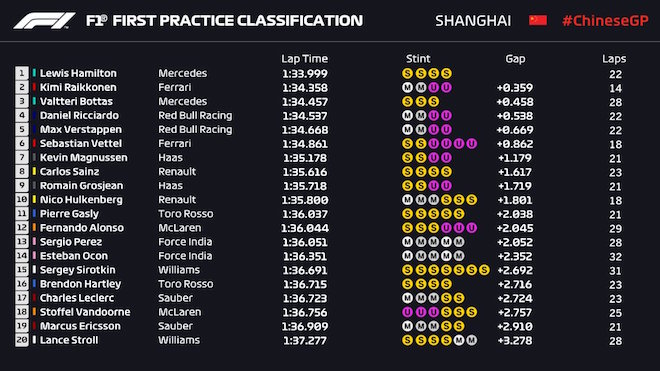