Lewis Hamilton was on top once again during second practice for the Chinese Grand Prix but Ferrari closed up on Mercedes in Friday’s afternoon session.

In FP1 Hamilton had been over 0.35s clear of Kimi Raikkonen while using a harder compound of tire, but the second practice session saw the gap reduced to just 0.007s as the front-runners all carried out lower fuel runs on the ultrasoft tire.

It wasn’t just Hamilton and Raikkonen who were closely matched, with Valtteri Bottas in third only 0.033s off his teammate and Sebastian Vettel 0.108s adrift of the fastest time in fourth place as Ferrari again looked competitive after back-to-back wins for Vettel so far this season.

Mercedes has yet to go three races in a row without a victory in the V6 turbo era but will also be wary of the threat from Red Bull as Max Verstappen and Daniel Ricciardo showed strong long run pace, with Verstappen also just 0.3s off the fastest time in fifth. Ricciardo was less happy with his own ultrasoft lap, however, ending up a second adrift down in ninth.

Between the Red Bulls were Nico Hulkenberg, Kevin Magnussen and Carlos Sainz as both Renault and Haas again looked like being the front-runners in terms of the remaining points positions, with all three getting within a second of Hamilton’s time.

Fernando Alonso rounded out the top 10 ahead of Sergio Perez and Pierre Gasly as just over half a second covered six teams from sixth to 13th.

There was trouble for Alonso’s teammate, however, as Stoffel Vandoorne had his session ended prematurely as a result of a loose wheel. Following pit stop problems for Ferrari and Haas this season, McLaren also hit trouble with Vandoorne pulling off the track at Turn 4 having noticed one of his wheels wasn’t fitted properly.

It didn’t prove to be a particularly costly stoppage – aside from the €5000 fine that appears to have become standard for such incidents – with rain starting to fall almost immediately as Vandoorne climbed out of his car, limiting running in the final 10 minutes of the session.

Alonso ventured out on intermediate tires alongside the two Toro Rosso and Force India drivers, with a threat of rain on Saturday making the wet running worth carrying out.

With the wind gusting throughout the day a number of drivers ran wide at Turn 6 – where there was a strong tailwind – and Marcus Ericsson suffered a late spin on intermediate tires. The two Saubers were 17th and 18th at the end of the session with Romain Grosjean in 19th after spinning on his fastest lap and Lance Stroll bottom of the times after similarly spinning off at Turn 8. 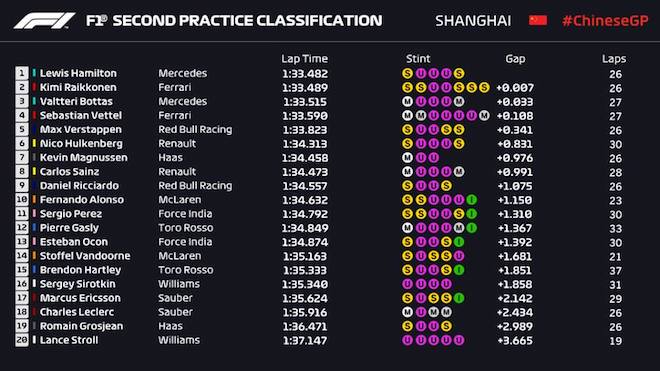