Alexander Rossi was fastest in a busy second IndyCar practice session around the streets of Long Beach on Friday.

Rossi stopped the clocks at 1m08.5567s to finish 0.1516s clear of Andretti Autosport teammate Ryan Hunter-Reay, making a spectacular save along the way when he carried a fraction too much speed into a corner and nearly caught the wall on the exit.

He wasn’t alone in having a heart-in-mouth moment: Coyne’s Sebastien Bourdais got away with an even bigger slide, and Simon Pagenaud, Scott Dixon and Zachary Claman De Melo all had to dig themselves out of the runoff at various times.

In all cases they escaped damage, but it was a rather different story for Takuma Sato, who’d bolted on some stickered reds and was on a qualifying simulation run when he overcooked it through Turn 1 and slammed hard into the barrier, bringing out a red/checker with just a handful of seconds left on the clock. The 2017 Indy 500 winner escaped injury, however his RLL crew has a lot of repair work to do before tomorrow.

Josef Newgarden was third fastest, 0.2s down on Hunter-Reay, despite being forced to sit out the final 10 minutes of the session for being late to the mandatory weigh-in following morning practice.

“I wish we cold have done the last 10 minutes,” said the reigning series champion. “I was talking with fans, that’s why I was late. It’s my fault I missed it, though. We got good running, we ran plenty, we just didn’t get our second run on reds.”

Sato had just jumped to P4 before his encounter with the barriers, leaving Dixon fifth fastest, although the New Zealander’s session-topping time from the morning stood as the fastest overall for the day. 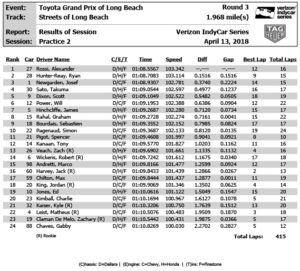