Darrell Wallace Jr. had something to smile about as well as a result to build on following 500 miles at Texas Motor Speedway.

“Hell yeah, we needed that,” Wallace said of his eighth-place result. “That was a good week off for us to regroup. The guys did a hell of a job all weekend long. I thought we had pretty decent speedBaker and a lot of people in the garage were like, ‘Your car is pretty good, so just don’t mess it up.’

“I had a couple of opportunities there, especially the first stop coming down, but our Click N’ Close Chevrolet was pretty decent all day for us. Drew [Blickensderfer, crew chief] did a great job doing some pit strategy on that last call to get us out there to fourth.”

Wallace did indeed line up fourth on the final restart but lost a few spots over the final 24 laps even though he had fresher tires. He still earned his second top-10 finish of the year, backing up an impressive and emotional third-place run in the season-opening Daytona 500.

“I don’t know if we were on the splitter on that last run, but she just wouldn’t turn going down into the corners and gave up a couple of spots,” said Wallace. “I’ll beat myself up over that one, but still walking away with my [second] top 10 in the Cup Series is pretty good.”

And much-needed for the Richard Petty Motorsports group. His runner-up finish in the Daytona 500 became a distant memory as Wallace racked up finishes of 20th or worse the last five weeks. In none of those five races did Wallace finish on the lead lap. 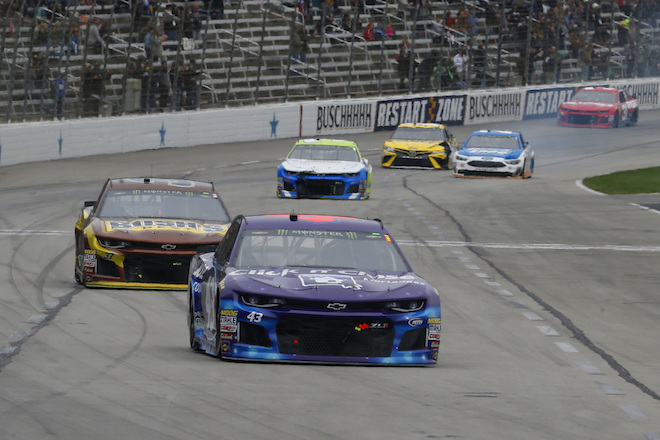 But Sunday, even battling back from one lap down, the post-race loop data backed up Wallace’s solid run, noting he spent 54.8 percent of the laps inside the top 15. Mid-race Wallace flexed his muscle by going-to-toe with Kevin Harvick for the free pass position.

“Really good day for us,” enthused Wallace. “We had some prospects on the box, so I think that went a long way as well. But man, what a good day, what a good weekend for us. We had the mojo the whole time and just super excited.”

The highest-finishing rookie, Wallace is now 19th in points.

“Thanks to Coca-Cola, NASCAR, Click N’ Close, Maui Jim and everybody involved in this program, STP, Air Force,” said Wallace. “We do so much for this small team and these big runs are going a long way for us.”