Gasly excelled in qualifying to secure fifth on the grid behind the two Ferraris, Valtteri Bottas and Daniel Ricciardo, and briefly led the Red Bull on the opening lap after making a good start. With the updated Toro Rosso showing good race pace, Gasly was able to relatively comfortably hold on to fourth place after both Ricciardo and Kimi Raikkonen retired, and Tost was full of praise for the work done by both Honda and his own team.

“I am very happy for the team because Honda as well as Toro Rosso worked very hard during the winter months and fortunately we got everything together,” Tost said. “I must say that the Honda research and development department in Sakura has done a fantastic job because the engine is fast and reliable, and from us, Toro Rosso side, we came here with some aero upgrades and improved the performance and this is the result and I hope that we can continue in a similar way.

“It will not be the fourth place certainly like this [every race] but one car at least will be in qualifying three and if possible both cars can score points, which would have been possible today. Unfortunately, Brendon [Hartley] got this 10-second penalty otherwise I think he could have finished eighth, ninth position.”

Hartley’s penalty was the result of a first-lap collision and he was later demoted to 17th for a formation lap error, but Tost says those issues should not mask the pace of both cars.

“He can do it. He shows the performance, the competitiveness. Today, the 10-second penalty in my opinion was quite tough because it was not deliberate. He touched Perez but that was the decision from the stewards which we accept and there’s nothing to add, otherwise he could have finished in seventh or eighth place.” 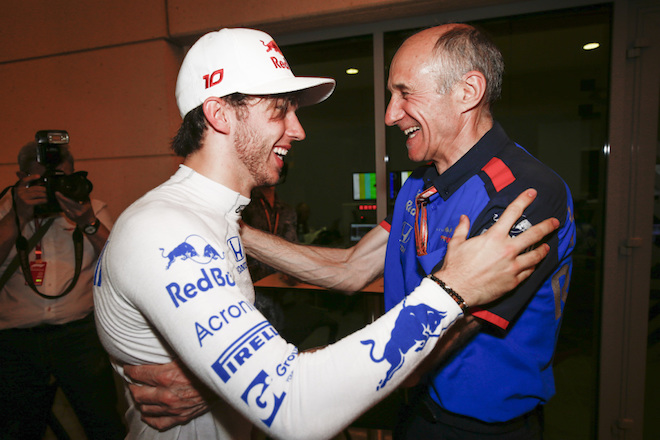 It was Gasly’s ability to deliver under pressure that impressed Tost (pictured at right, above, with Gasly), with the Frenchman maximizing his opportunities throughout the weekend.

“Pierre has done an incredibly good job I must say because also in the qualifying he got everything together and [in the race], good start, fantastic how he fought at the beginning against [Kevin] Magnussen, really defending very, very hard and then he brought it home without any mistakes. Congratulations, very good.”