Raikkonen half a second clear in third practice

Raikkonen half a second clear in third practice

Kimi Raikkonen was over half a second clear of the rest of the field in the final practice session for the Bahrain Grand Prix as Mercedes struggled for pace and teammate Sebastian Vettel hit trouble.

Having topped FP2 as Ferrari enjoyed a comfortable advantage on Friday, Raikkonen remained fastest in FP3 and his lap time of 1m29.868s left him a full 0.525s ahead of the Red Bull pair of Max Verstappen and Daniel Ricciardo. Verstappen led the two by just 0.059s, and there was then another quarter of a second back to Lewis Hamilton in fourth place.

Hamilton struggled on his supersoft qualifying simulation but is already primed for a five-place grid penalty as a result of a gearbox change, while teammate Valtteri Bottas was nearly a second off Raikkonen’s pace in sixth place. Having struggled early on, Bottas had a big lock-up at the start of his second attempt on supersoft tires and had to abort.

Sandwiched by the two Mercedes drivers was Vettel, who aborted his first run of the session as a result of a loose piece of bodywork on his right-side bargeboard. Ferrari changed the damaged part and Vettel rejoined but was back in the pits after a total of just eight laps and jumped out of his car with more than 10 minutes remaining as Ferrari removed the engine cover and started more substantial work on his car.

Ferrari’s session was almost damaged further when Raikkonen emerged from the pit lane late on and nearly drove into the side of Verstappen at Turn 1, having to take heavily to the curb to avoid contact.

In a sign of Mercedes’ struggles, Bottas in sixth was closer to the two Renaults of Nico Hulkenberg and Carlos Sainz behind him than he was to the top three, with all the cars down to Sergio Perez in 14th place also with 0.6s of the Finn.

At the head of the pack behind Renault was Pierre Gasly as Toro Rosso continued to enjoy encouraging pace in practice. Gasly was ninth overall ahead of Fernando Alonso in the McLaren, with just 0.007s between the pair. Brendon Hartley also had a much better final session in 11th place, 0.022s off his teammate.

Romain Grosjean was 12th overall ahead of the Force Indias, with the remarkably tight gaps continuing as all three were separated by just 0.051s. Haas continued to look less competitive than in Melbourne as Kevin Magnussen ended up 15th overall, while Williams also struggled as Sergey Sirotkin and Lance Stroll propped up the times.

While lap times can be hard to read into due to qualifying taking place at sunset under floodlights, the close nature of the field suggests there will be an extremely tight battle to escape Q1. 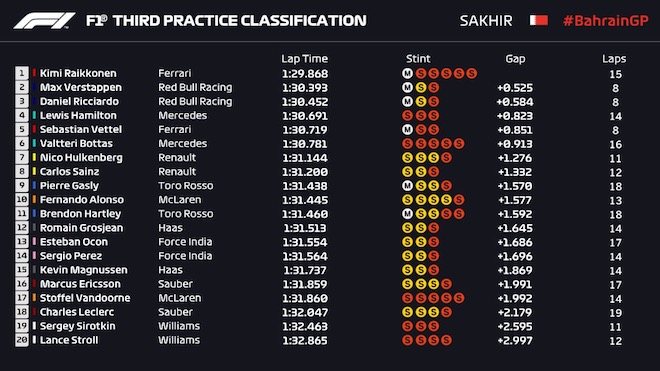