Early in the session, Max Verstappen stopped at the end of his second installation lap and pushed his car back along the track into the pit entry, where it was met by the Red Bull mechanics. An electrical issue on the right-hand side of the car was to blame, with the team working to replace the parts but failing to get the Dutchman back out in FP1.

While Verstappen was drawing attention for pushing his car in 86 degree heat, teammate Ricciardo was trying to get out for his first run of the day but was unable to leave the garage, eventually joining the action after a delay. After a number of mechanics worked on the right rear of Ricciardo’s car in the middle of the session, he duly returned to the track to set the pace with a 1m31.060s on the soft compound tire.

That left Ricciardo 0.304s clear of Valtteri Bottas in the Mercedes, with Kimi Raikkonen less than 0.1s further back for Ferrari on the same compound of tire. With Sebastian Vettel fourth – 0.012s adrift of Raikkonen – it suggested the top three teams remain closely matched, having looked relatively close on race pace in Australia.

Lewis Hamilton had a bit of a scruffy session, with a lock-up effecting his best lap as he ended up over 1.2s adrift of Ricciardo, while Romain Grosjean enjoyed another strong session for Haas in sixth place, albeit on the supersoft compound tire.

Pierre Gasly was the surprise of the session for Toro Rosso – using an updated Honda MGU-H and turbo after his retirement in Australia – as he ended up seventh quickest on the soft tire, ahead of Carlos Sainz, Kevin Magnussen and Nico Hulkenberg on supersofts.

Fernando Alonso was 11th while trying a new bargeboard on his McLaren, just ahead of Charles Leclerc in the Sauber. Despite some encouraging pace, Leclerc had a spin at Turn 8, spinning through 90 degrees at Turn 8 just a few minutes after Lance Stroll had swapped ends at the exact same place.

Verstappen’s problems kept Force India off the bottom of the timing screens, with Sergio Perez and Esteban Ocon in 18th and 19th respectively after carrying out major set-up changes.

The opening session is only partly relevant to the race weekend, with FP2, qualifying and the race taking place at sunset, leading to lower track temperatures. 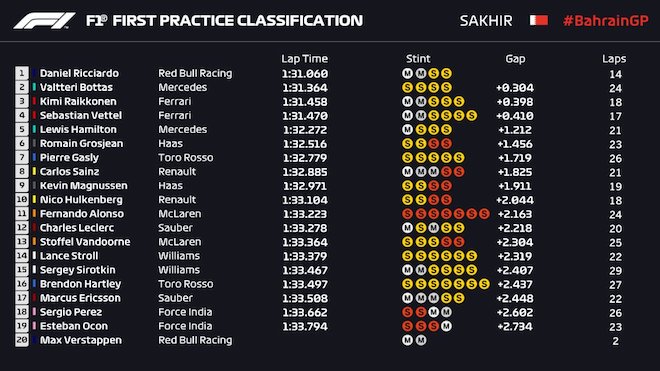