Kimi Raikkonen set the fastest time of the second practice session for the Bahrain Grand Prix but had his session cut short by a pit stop error as Ferrari held a clear advantage.

Having been first to set a time on the supersoft tire in the evening session – a crucial one for the teams as it takes place at the same time as qualifying and the race – Raikkonen set the pace with a 1m29.817s to finish FP2 0.011s clear of teammate Sebastian Vettel. When the teams started focusing on long runs, however, Raikkonen came in for a pit stop to switch tire compound and was released when the front right wasn’t properly attached, forcing him to stop on the exit of Turn 3.

Raikkonen’s incident will be investigated after the session, with Ferrari set to be fined due to releasing the car in an unsafe condition. Ironically, it was Haas – the team that has come under fire for the close nature of its partnership with Ferrari – that had similar issues during the last race in Australia.

Despite that error, Ferrari will have been encouraged by the final result as it was over half a second clear of the rest of the field. Valtteri Bottas was third fastest for Mercedes, just under 0.1s ahead of teammate Lewis Hamilton. Although Hamilton was held up by Kevin Magnussen in the final corner, he was already comfortably down on the Ferraris at that stage of his lap.

The two Red Bulls were fifth and sixth quickest, respectively, with Max Verstappen just 0.006s faster than Daniel Ricciardo – but the Australian had his low fuel run compromised as he was almost involved in a collision as he overtook Bottas. The Finn was unaware of the Red Bull approaching and Ricciardo went around the outside of the Mercedes at Turn 6 and the pair made the slightest of contact.

An extremely close trio of Nico Hulkenberg, Pierre Gasly and Fernando Alonso were covered by just 0.062s, with the Toro Rosso surprisingly competitive in FP2 having had to take a new ICE, MGU-H and turbo due to a failure in Australia.

Stoffel Vandoorne rounded out the top 10 for McLaren – some 1.6s off the overall pace – with executive director Zak Brown telling RACER the team appears to be in the same competitive position as it was in Australia.

Both Haas drivers were outside the top 10 in the second session – with Romain Grosjean 11th and Kevin Magnussen 15th – while the main incident of note came for the other Ferrari-powered car as Sauber’s Marcus Ericsson lost control at Turn 3. The Swede ran backward through the gravel having apparently lost control on some oil left on track by Porsches earlier on Friday, but was able to recover to the pits to have the car assessed and rejoin the session.

The incident saw Ericsson end FP2 in 19th place with only Brendon Hartley below him, as the second Toro Rosso driver struggled and was over 1.6s slower than teammate Gasly. 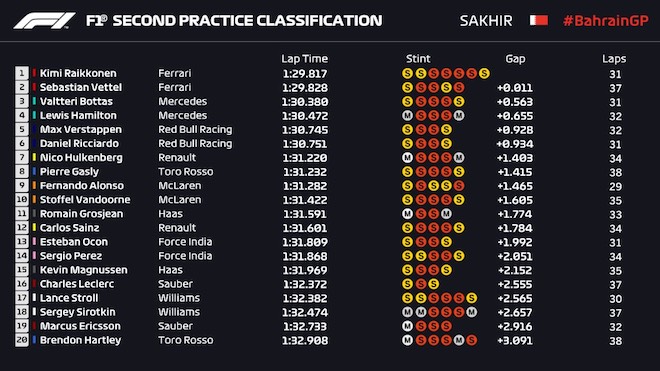