On a hot, slippery opening practice session at ISM Raceway in Phoenix, Simon Pagenaud and Tony Kanaan showed everyone the quick way around.

“We ran quite a bit slower today than we did in the test,” said Kanaan of the February open test session. “It’s hotter and slower and it’s going to be very tricky in qualifying.

“I imagine tonight in the final practice will give us a better evaluation of what’s going to happen in the race because it’s going to be a lot closer to when we race.”

Pagenaud is the defending champion of this race and picked up where he left off.

“Good session for us, learned a lot than we can apply later,” said the 2016 IndyCar champion.

Sebastien Bourdais, who captured the season opener last month at St. Pete, turned in the third-best lap of 20.200 (182.138 mph) in the Dale Coyne Racing SealMaster Honda and Ryan Hunter-Reay was fourth fastest in the Andretti Autosport DHL Honda.

And James Hinchcliffe, who’s crashed here in testing and practice in two of his last three visits, got a handle on things and posted the sixh-best lap of 181.824 mph in the Arrow Honda for Schmidt Peterson Motorsports. 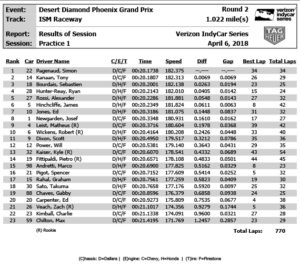 Off Road 8hr ago ET