MEDLAND: Why a fast Kimi could be bad for Bottas

MEDLAND: Why a fast Kimi could be bad for Bottas

For a sport that places such a high price – figuratively and literally – on performance, Formula 1 is remarkably patient. Bosses at struggling teams are often given the chance to try and turn things around, and past results often buy drivers time even if more recent ones have been poor.

None have been more patient than Ferrari has been with Kimi Raikkonen.

Kimi remains one of the most popular drivers on the grid, but he’s also one of the most infuriating. Remember the Raikkonen of old? Decisive in an overtake, blindingly quick, the sort of driver who consistently got you on the edge of your seat? He hasn’t been seen for a while.

Too often Raikkonen ends up playing second fiddle. Sometimes it seems willingly, other times it doesn’t, but in either scenario the Finn ends up in a position you just know the Kimi of the past would not allow himself to get into.

But perhaps Melbourne was not one such scenario. And maybe, just maybe, there are signs of new life in the 2007 world champion this year.

Looking at the raw results tells you that Sebastian Vettel won the Australian Grand Prix, just like he had a year ago, and Raikkonen was a fairly distant third to his teammate. But that overlooks the performance of the 38-year-old throughout the weekend.

Even as early as practice, Raikkonen looked quick. His lap time on the soft tire in the opening session was impressive, but in the recent past there have been too many examples of Kimi appearing quick and then being nowhere in Q3. This time round, he continued his good form to pip Vettel to a place on the front row by just 0.01s.

When the lights went out, Raikkonen had a look around the outside of Lewis Hamilton at Turn 2 and then settled into a rhythm that kept him no further than 3.3s behind the Mercedes – for all the pace it was expected to show – before making his pit stop. Hamilton had to react, Vettel tried something different and got lucky.

That Vettel went on to win and Raikkonen wasn’t really a factor after the Virtual Safety Car made it feel very much like another false dawn, but the Finn is notoriously level-headed and knew he was never going to find a way past Hamilton. 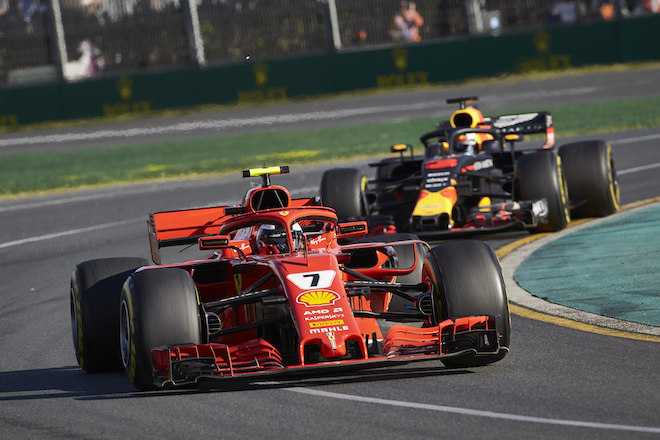 “I had the chance to fight for the first place in the beginning and I was pretty happy with the car all weekend,” Raikkonen said of his Melbourne performance. “Obviously there are things we have to improve, we know that, but it wasn’t too bad. In the end, out of all the guys at the front I was the one with the oldest tires so, obviously, with [Daniel] Ricciardo my aim was to keep him behind.

“I had followed in the first part of the race but it was very difficult to overtake, so that wasn’t really the biggest thing to try to do anymore, to get in front of Lewis. I was happy to take the third place. Obviously not ideal, but I was pretty happy with everything.”

There was even an expletive-ridden radio message when he learned of Vettel going long in the opening stint, which he later clarified was not because his teammate’s gamble may pay off, but because his team hadn’t told him. If Seb got lucky and won the race, fine. But Kimi wanted to know of Vettel’s threat to his own position.

That shows the fire is still there somewhere, and that Raikkonen truly believes he can win races and fight for himself at Ferrari. Vettel himself pointed out the car isn’t where he wants it yet, admitting that Ferrari is “a bit worse off” than it was at this stage last year, and that appears to be playing into Kimi’s hands at present.

It has only been one race, but we’re heading to Bahrain, where Raikkonen has been strong in the past. His level should remain high this weekend, but the acid test will be if he can remain close to Vettel as the season goes on and the car is developed.

The early signs are promising – and only that – but the reverse is true for the other Finn on the grid.

Much like we shouldn’t get carried away by a solitary encouraging performance from Raikkonen, it’s not yet fair to say Valtteri Bottas is under a great deal of pressure after just one race. But he’s certainly put himself on the back foot at the start of this season.

After the Australian Grand Prix a year ago, I wrote about how Bottas had shown signs of making himself a real player in the 2017 title race. For a first race in a new team – on a track where mistakes are punished – he’d judged everything well, and displayed the sort of temperament that suggested he would be a success at Mercedes as he grew in confidence.

It looked a fair point after he bounced back from a mistake in China with pole in Bahrain and victory in Russia, but as the season wore on and the car was developed, Hamilton grew stronger and Bottas struggled.

Perhaps the same will be true of Raikkonen this year. But if it isn’t, then Bottas will be under more pressure to deliver. Last year Mercedes was often fighting just one rival, and on many occasions it was a straight Hamilton vs Vettel battle. Bottas has said he needs to find consistency this year after having shown up very well intermittently in 2017, so crashing out of Q3 in Melbourne was an inauspicious start. 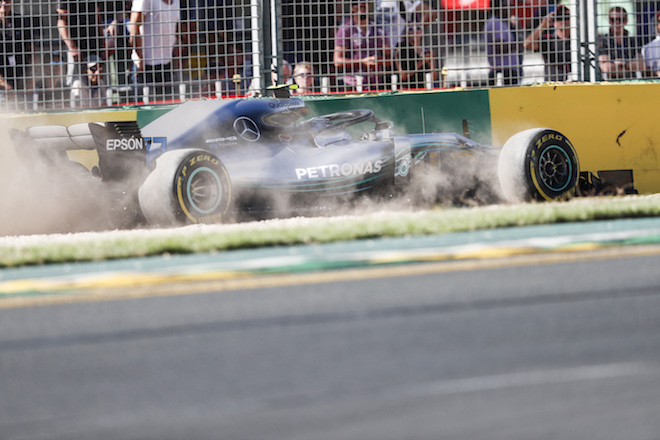 “It was not a good weekend, but what can you do?” Bottas said after Australia. “I think the mistake I made in qualifying kind of ruined my weekend. But I’m not panicking. [Melbourne] was just one race out of 21, so we have a long year ahead.

“Something I’ve learned from last year [is], you need to learn from every mistake, but there’s a limit [to] how much you need to beat yourself up, because there’s always another race in one or two weeks, and you need to be in your best mental shape and physical shape too.”

Straight out of the Raikkonen handbook.

While F1 fans would love to continue seeing Kimi at the sharp end, Bottas simply needs to be. Out of contract at the end of the year, and with the likes of Daniel Ricciardo and Esteban Ocon available, the Mercedes driver must at least back up his teammate. But in the first pressure situation of the year, he cracked.

Ultimately, it hurt Hamilton’s chances of victory. With Bottas not a factor in the race in Melbourne, Vettel was free to try something different. It didn’t go unnoticed.

“It’s definitely not easy to fight against a team with two cars in the mix compared to one team with one,” Hamilton said. “I think we will work together, and Valtteri will be working very hard to make sure he’s up there. He’s going to be fighting for wins this year, for sure. [Melbourne] probably has shown last year [that] it was important to have both cars up there; maybe now it’s shown that it’s even more important than ever before. Especially with Red Bull being there, and both Ferrari drivers now – Kimi all of a sudden is driving really well, which is great to see.”

They’re just starting points for both, but if Raikkonen continues on the same path, what will that do for Vettel’s dynamic within Ferrari? And if Bottas leaves Hamilton vulnerable again, could that also unsettle matters at Mercedes?

Hamilton might not mean it, but he’s right. It’s great to see.