PRUETT: To bump or not to bump?

PRUETT: To bump or not to bump?

To bump or not to bump? It’s a Shakespearean question the Indianapolis 500 has been able to avoid, at least in serious numbers, for most of the decade.

With its return in May where as many as 36 drivers could try to qualify for 33 starting positions, IndyCar will have some soul-searching to do.

Robin Miller has been preaching for months that IndyCar should ease the restrictions, forego bumping, and let everyone take part in the race. And if IndyCar felt obliged to go that route, it wouldn’t be the first time that more than 33 drivers took the green flag. The last example came in 1997, when 35 drivers rolled off the starting grid, and as the modern line of thinking goes, with IndyCar on the rise as more teams and sponsors invest in the series, the last thing it can afford to do is send a few drivers packing on Bump Day.

I’ll happily take the voice of dissention on the topic.

I don’t care for participation trophies, and without bumping, that’s what we’ve had in recent years. A few drivers have been fortunate to scrape in and take spots at the back of the field due to low entry numbers, and with the extra entries now heading towards the Speedway, I’m loving the return of fighting for the honor of being among the 33 starters.

With IndyCar taking steady strides in the right direction, the time is right for an infusion of higher expectations at the Indy 500. Stick with the 11 rows of three.

For the slower drivers, making the field of 33 has nearly become a surefire thing since the Dallara DW12 era launched in 2012. Only two drivers have missed the cut in DW12s; one [Michel Jourdain Jr, below] went home in 2013, and another was trimmed in 2015. That’s all. 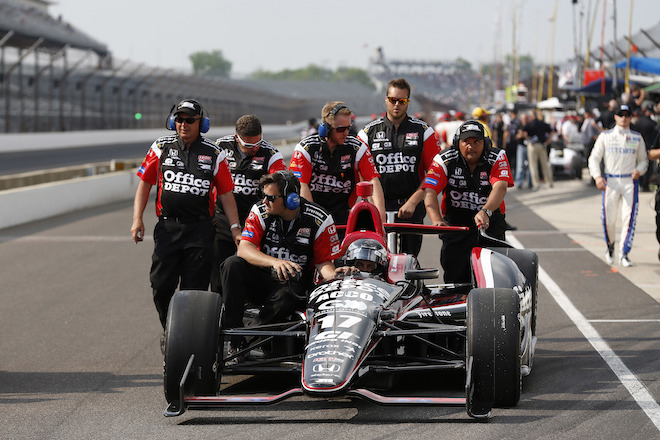 We’ve gone two seasons without the threat of bumping, and we’d have to look back to 2011 as the last time when drivers had to sweat as the bumping process began. Six entries failed to make the field that May, and for those who recall the tension and drama, there was no question of the importance contained within those 33 opportunities.

Take a look at the drivers, both rookies and veterans, who’ve stumbled into the show on more than one occasion, often at unimpressive speeds, and consider this: provided we have some solid names in quality entries, real pressure – the kind that builds acid reflux in your chest and makes sleeping a challenge – will be applied. And isn’t that a marvelous thing?

Rookie teams and drivers should not get an automatic pass to race in the Indy 500 on their first attempt. The same goes for some of the smaller teams and older drivers who can’t, in all honesty, say they’ve done much since last year’s race to improve their competitive standing. It seems silly to have to say this, but the traditional field of 33 is enough. With a hard cap of 33 positions to pursue, a natural filter is applied to welcome in the best, filter out the slow or unfortunate, and set a field based on merit when bumping is involved.

With the return of bumping this year, the crucial question can be asked once more: do you possess the skill and speed to earn your way in? If not, get to work on improving your craft, find bigger sponsors, sign with a more successful team – maybe all three areas need work – and try again next year.

Having worked for a number of small IndyCar teams that lacked budgets or star driving talent, I’m familiar with the anxiety of Bump Day. As one of the tiny programs making its Indy 500 debut in 1997 during the 25/8 conundrum, [above, Pruett in amazing tartan cap] our Thomas Knapp Motorsports/Genoa Racing effort almost missed out while vying for one of the eight spots made available to non-guaranteed entrants.

We had a series of small heart attacks along the way with blown engines and bad luck, and as an Indy Lights team that have never been to the Speedway, we also didn’t have much of a clue as to what we were doing when practice started. Driven by fear of failure, we managed to qualify on the 10th row during our third and final attempt using the only chassis we owned.

There was no extra money to rent another car or buy our way into a qualified entry if we were bumped. And I’m fairly certain our sponsors would have jumped ship and struck a deal to be on another car if the TKM/Genoa ship sank during time trials.

And that’s how the system is meant to work. No participation trophies. No freebies.
Granted, it happened in 1997 when two cars that failed to qualify were added to the back of field, and it has happened a few times in the DW12 era when only 33 cars have turned up. But that isn’t a good thing. In the absence of pressure, Bump Day has been a joke. I’m hopeful, come May, it will no longer be a laughing matter.

I’ll feel for the teams and drivers and sponsors who, provided IndyCar sticks to its limit of 33 starters, will not partake in the 102nd running of the Indy 500. And I’ll also feel relieved in knowing 33 extraordinary efforts will be needed to go forward and chase glory at the greatest spectacle on earth.