INSIGHT: Why is BHA racing in the PWC?

INSIGHT: Why is BHA racing in the PWC?

The name of the game for race teams today is diversity, at least when it comes to sustaining their business. In 2018, Bryan Herta Autosport is venturing into unknown territory, though you wouldn’t know it based on their immediate success. With a debut double 1-2 finish in the Pirelli World Challenge TCR class at Circuit of The Americas on March 24-25, Herta’s operation adds touring car success to its IndyCar and Global RallyCross exploits.

Teaming with automaker Hyundai in the new-to-America TCR class, Herta’s move has linked his organization with another manufacturer in a category with a scale that’s right for his lean and mean operation.

“As a race team, if we want to have a real motorsports presence we can’t just specialize. We have to diversify, and show we can be competitive in multiple disciplines,” says Herta. “For us this is a chance to stretch our legs, and even [get] a little bit out of [our] comfort zone, to show that we are open for business and always looking for new opportunities.”

Herta and Hyundai have been talking about such new opportunities for the past year. When the TCR class was announced for the PWC, they found a fit with the Hyundai i30, marketed in the U.S. as the Elantra GT, and the launch of the new N performance brand.

As it turned out, Bryan Herta Autosport and Hyundai were independently reviewing the American motorsports landscape, and each identified PWC as a series that would suit their respective objectives.

“We were primarily looking for competition, for a place that we could step in and compete straight away. The fact there is now a race-ready TCR class and that Hyundai already had a TCR-proven car ready to go checked all the boxes,” said Herta.

When it comes to how this new program with Hyundai fits in with their IndyCar program, Herta admits there is little direct crossover. Everything about the two programs, from cars and parts to racing styles and regulations, is separated by a wide chasm. 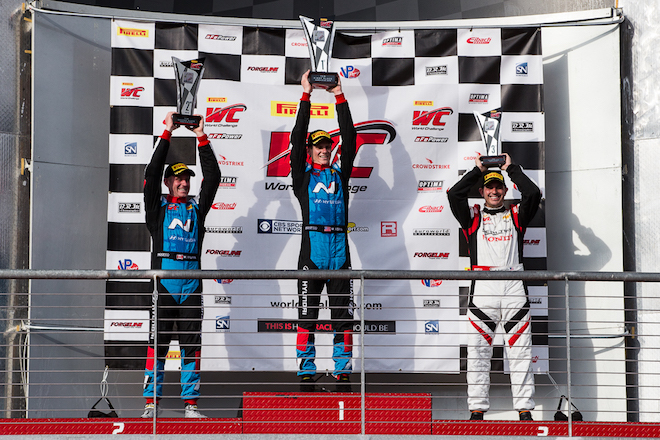 “The cars share nothing in common, yet the level of preparation and organization, the allocation of resources, the dedication to continuous development and improvement are what we definitely carry over from the IndyCar side,” says Herta, again underscoring the idea that success across diversified programs is the best way for a race team to prove its ability.

Herta points to his IndyCar partner team, Andretti Autosport, as well as Team Penske and Chip Ganassi Racing among many others that have faced the current economics of motorsport by expanding their race portfolios across numerous disciplines.

“In the mid to late ’90s when I was racing IndyCar, budgets swelled,” Herta recalls. “We spent more not just on cars and engineering, but on salaries, travel, entertainment and a lot of other stuff. But the economy changed and everyone has been forced to do more on less margin.

“At the same time, our overheads are the same, or even higher. So if you really want to build a thriving business infrastructure and support a development and engineering program, you have to spread those costs over multiple programs. We have to take smaller margins on multiple programs to come up with the total budget for our business.”

Does Herta see this new reality as a positive for motorsport or just simply the state of play?

“It’s an interesting question, because I’ve never thought of it as either a positive or negative, but simply what we have to do,” Herta muses. “I’m a racer, so I enjoy it. I like being at the race track this weekend and being competitive in Pirelli World Challenge just much as I like competing in IndyCar. So, there are a lot more positives than negatives, but that doesn’t matter. It’s the way it is right now, and that’s fine with me.”