IndyCar’s field of 33 is already confirmed for the 102nd Indianapolis 500 in May. In fact, at least 34 drivers have RSVP’d for the party, and two or three more could be in the mix by the time practice begins.

Once JR Hildebrand’s known (but unconfirmed) Dreyer & Reinbold Racing entry is formally announced, IndyCar fans will have a more compelling reason to watch the first day of qualifying for the Indy 500 on May 19. Bumping will take place once the second DRR Chevy pushes Indy’s entry list to 34, and from the ongoing talks between prospective drivers and teams, a 35th and possibly a 36th entry could add to the qualifying drama.

Chevy has said it would split the field with Honda which, if true, could commit the Bowtie to 17 or 18 engine leases. At present, including Hildebrand, Chevy is at 15. In recent years, Honda’s Indy 500 comfort zone has been in the range of 18, and it already has 19 confirmed cars in place. It means Chevy will be responsible for supplying power to entry 35 and beyond.

Three of its teams, A.J. Foyt Racing, Harding Racing, and Lazier Partners Racing, could expand the field with entries. Chevy’s Juncos Racing outfit, which was in contention to run a second car alongside 2017 Indy Lights champion Kyle Kaiser, made the decision on Tuesday to stick with one entry.

From RACER’s last Indy 500 grid update, a few drivers have moved closer to landing in Gasoline Alley, and a few more could be shifting their targets to races that fall between June and the Sept. 16 season finale at Sonoma Raceway.

The pairing of James Davison, a three-time Indy 500 starter, with sponsor David Byrd is said to be the strongest possibility to fill the 35th slot. Talks with Foyt, Harding and Juncos are believed to have taken place on making a car available for the hard-charging Australian. 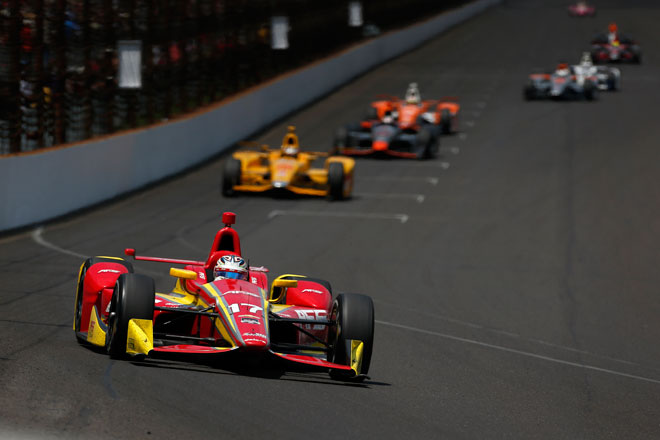 Six-time starter Sebastian Saavedra (try saying that quickly three times) and car owner/sponsor Gary Peterson have also been positioned as candidates to submit an entry. Through Peterson’s AFS Racing program, Saavedra teamed with Juncos Racing for a combined effort in 2017 (pictured above), but with Juncos out of the equation, Foyt or Harding would be the only landing spots left to explore.

Saavedra’s countryman Juan Piedrahita continues to evaluate the Indy 500 as the event to make his Verizon IndyCar Series debut. The Mazda Road to Indy veteran, who earned pole position for the Gateway Indy Lights round last year, is rumored to have a solid budget to offer and finds himself in the same race for the same seats.

Little has been heard from Mikhail Aleshin after the former Schmidt Peterson Motorsports driver made a number of Indy 500 inquiries. With few front-running opportunities left to secure, young American RC Enerson could defer his Indy 500 ambitions in order to make a few appearances later in the year. And Buddy Lazier, who expressed his intent to make another run at earning a spot in the field of 33 – at age 50, no less – has yet to declare those plans have changed.

At least one car will fail to make the race, and that driver could be joined by a few others who get bumped at 6 p.m. on May 19. This should be a very different Indy 500 than most this decade.