Sebastian Vettel beat Lewis Hamilton to victory in the Australian Grand Prix after a calamity at Haas led to a Virtual Safety Car period that benefited Ferrari.

With Hamilton leading Kimi Raikkonen and Vettel, Ferrari opted to pit its lead car for soft tires after 18 laps, resulting in Mercedes responding. While Vettel stayed out to lead on old ultrasoft tires, it was the rest of the pit stops that flipped the race on the head as Haas suffered heartbreak.

Kevin Magnussen had leapfrogged Max Verstappen off the line to run fourth, and a spin from the Dutchman promoted Romain Grosjean to fifth place. However, both Haas drivers were forced to retire immediately after making their pit stops, with Magnussen first to pull over at Turn 4 as mechanics signaled there was an issue with his left rear tire.

Grosjean came in a lap later but it was the front left this time that proved problematic, with the mechanics again immediately waving to signal an issue. With the Frenchman stopping on the inside of Turn 2, marshals were required on track to recover the car and a Virtual Safety Car was deployed.

The full Safety Car is out as marshals clear Grosjean’s car#AusGP #F1 pic.twitter.com/IFMmGHGDPB

That opened the door for Vettel to pit while the rest of field were having to drive at a reduced pace, and so the time lost in the pits was much reduced to racing speeds, allowing him to retain the lead ahead of Hamilton.

A frustrated Hamilton put pressure on after racing resumed but was unable to find a way through and turned his engine down late on to eventually finish five seconds adrift in a repeat of the top two result a year ago.

Raikkonen came home in third place after holding off Daniel Ricciardo for the stint after the Safety Car, with the Australian climbing up from eighth on the grid at his home race, profiting from the Haas misfortune and Verstappen’s spin but pulling off a good move on Nico Hulkenberg early on. 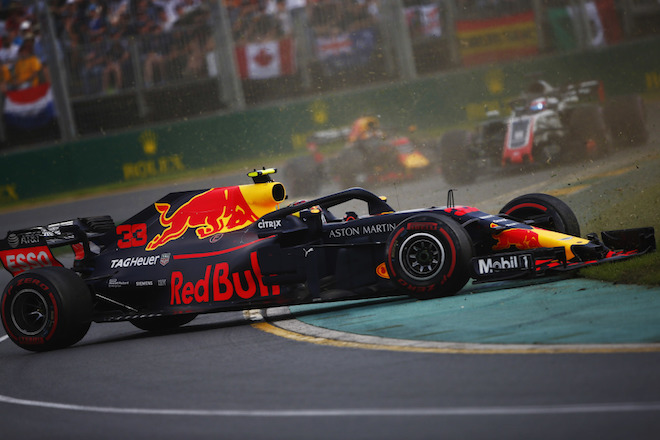 While Vettel gained two positions and victory under the Virtual Safety Car, it was a similarly significant moment for Fernando Alonso as the Spaniard emerged in fifth place after also pitting during the delay. Alonso – who predicted such a result on Saturday night – had been running tenth before the two Haas drivers stopped and emerged 0.1s ahead of Verstappen after his stop.

Verstappen actually passed Alonso as the McLaren exited the pits but was instructed to give the place back and then couldn’t find a way through over the remaining 27 laps as the pair dropped to nearly half a minute behind the leaders.

Hulkenberg was seventh after sitting behind the Alonso/Verstappen battle from the resumption – with overtaking still extremely difficult on the Albert Park circuit – while Valtteri Bottas recovered from 15th on the grid to eighth place after his crash in qualifying. Bottas had the pace to finish higher but with a train of cars behind Alonso all getting DRS, he was unable to progress.

Behind Bottas, Stoffel Vandoorne came home ninth to make it a double-points finish for McLaren, while Carlos Sainz withstood the attentions of Sergio Perez to secure the final point in tenth despite suffering from nausea late in the race.

Esteban Ocon, Charles Leclerc – with a solid debut drive – Lance Stroll and Brendon Hartley were the remaining finishers, with Hartley the only driver lapped after needing to pit at the end of the first lap due to a flat-spotted tire.

While Haas was left devastated at the lost points, there was also a disappointing debut for Sergey Sirotkin as he retired just four laps in with brake failure. Marcus Ericsson also failed to finish due to a hydraulic issue, and Honda had an inauspicious start as Pierre Gasly’s power unit lasted just 15 laps before he was forced into the pits. 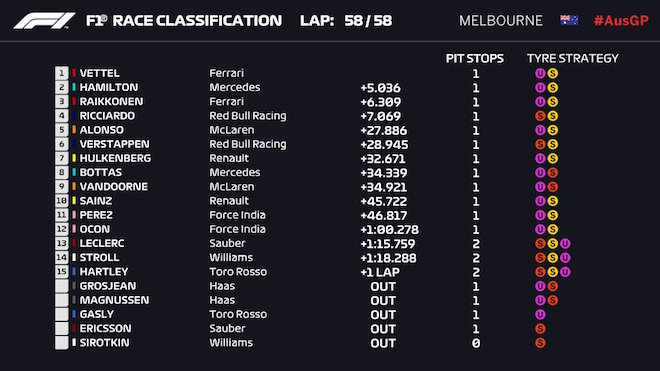