Aric Almirola never thought of the money or the notoriety. He simply wanted to be a race car driver. Sunday, Almirola will do that for the 250th time in the NASCAR Cup Series with the green flag at Martinsville Speedway.

“To be able to do it at this level and to have stayed in the Cup Series for this amount of time and have this opportunity in front of me, it’s incredible to think about my 250th start. I now realize when I look in the mirror and I see the gray hair in my sideburns and in my beard, it all makes sense.” 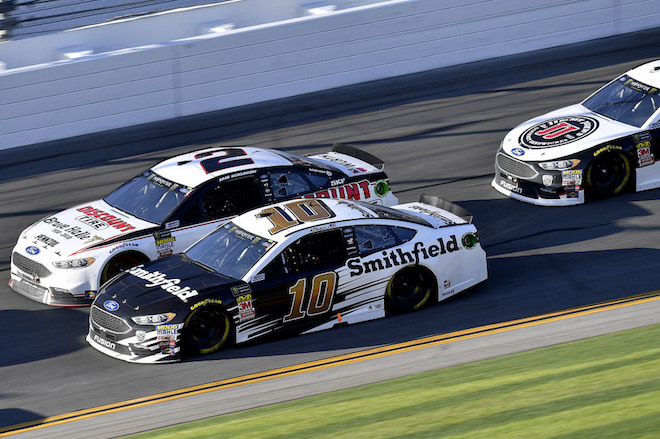 In his first season with the No. 10 Ford at Stewart-Haas Racing, Almirola appears rejuvenated. Driving one of the fastest cars in the series, Almirola came within half a lap of winning the Daytona 500 to start the season. He sits 10th in points with five top-13 finishes to start the season.

Last week, Almirola admitted he feels like a rookie again in working with a new team and showing up the track each weekend with a blank slate. And after six seasons at Richard Petty Motorsports, Almirola had tempered expectations coming into the season.

“I think Johnny [Klausmeier, crew chief] and I sat down at the beginning of the year and we thought that running top 15 right out of the gate on a regular basis would be ideal, and so we’ve done better than that,” said Almirola.

“I’m proud of that and I’m pleased that we’ve gotten off to such a great start, but, at the same time, when you look at that company and you look at how fast their cars are across the board – my other three teammates show speed every week and are running up in the top 10, so if I wasn’t I would feel like we’ve got a big problem. It makes me happy in not only our team but in myself to be able to get in that car and go get the job done to be able to at least be competitive and on a level playing field with at least two of my other teammates.

“We’ve got one that’s just incredible right now [Kevin Harvick] and they’ve been doing a great job, but I think for us as a new team and a new group of guys all working together, I feel like we’re off to a really good start.”

Although he’s led just one lap in five races, Almirola is already working with a career-high average finish at 10.6. His two top-10 finishes also have him on pace to best not only last year’s total of six but his single-season career high of seven (2014).

“I wish I knew going into all of this how tough it was really going to be,” Almirola reflected. “I think everybody views things from TV and thinks they’re way easier than they really are. The reason things look easy when you watch on TV is because those people are professionals and they do it for a living. The reason they make it look easy is because they’re really, really, really good at it.

“I just think as a kid you grow up and you’re arrogant and you think you know everything and you’re awesome. Then, it’s especially the case when you get your first few opportunities and you’ve got people who surround you and they’re pumping your ego up, and telling you that you’re awesome and that you’re going to be the next big superstar. What you don’t realize in those early years is that it’s so tough. You’ve got to want it. Desire and passion don’t do it alone. You’ve got to have the work ethic, the mental stability, all those things to make a really great race car driver.”