Lewis Hamilton was half a second clear of teammate Valtteri Bottas during the first practice session of the 2018 Formula 1 season at the Australian Grand Prix.

Following an impressive pre-season showing that marked the defending champions out as favorites once again, Mercedes enjoyed a strong start to the opening weekend in Melbourne. As it did a year ago, the team secured a one-two result, and it was a similar story as Hamilton led Bottas by a little over 0.5s to set the pace.

Max Verstappen was third quickest for Red Bull, nearly three quarters of a second off the pace but within 0.2s of Bottas, as all of the top three used ultrasoft tires. FP1 results in Melbourne are not always representative as teams try a host of new components, but Kimi Raikkonen’s lap time in fourth place was much more encouraging in terms of hopes of a close battle at the front as he posted a 1m24.875s on the soft compound tire.

With Raikkonen 0.849s off the pace but on the hardest available compound for this weekend, the lap time suggests the gap will be smaller in FP2 on Friday afternoon. Sebastian Vettel was fifth, just under a second off Hamilton on the supersoft tire, while Daniel Ricciardo rounded out the top six but was 1.037s off Hamilton’s pace.

With Haas tipped to shine at the start of the season, Romain Grosjean was seventh fastest but there remained a clear gap to the top three teams, with the Frenchman 1.7s slower than Hamilton. The only point of concern for Grosjean came when he ran a little wide over the curb at the high-speed Turn 12 and appeared to lose some bodywork.

McLaren endured a frustrating start to the weekend as exhaust issues limited Fernando Alonso’s track time, but once the team had resolved the problem Alonso was able to put in a number of consistent laps and ended up eighth fastest. Fellow Spaniard Carlos Sainz was ninth, within 0.2s of Grosjean and over half a second clear of tenth-placed Stoffel Vandoorne.

Vandoorne also missed out on some track time – with McLaren completing a total of just 31 laps as a team compared to the busiest drivers completing 30 alone – but improved late on to pip Pierre Gasly in the Toro Rosso-Honda by 0.012s.

From Vandoorne down was a tightly-packed midfield, with Gasly, Sergey Sirotkin, Nico Hulkenberg, Esteban Ocon, Lance Stroll and Sergio Perez all within 0.3s of the second McLaren.

While Grosjean had a strong FP1, Kevin Magnussen had a tricky session in the other Haas as he ran wide at the penultimate corner and spent plenty of time in the garage, registering a total of just 13 laps.

Brendon Hartley similarly had reliability issues and was limited to 16 laps down in 18th place, while the two Alfa Romeo Saubers brought up the rear some four seconds off the pace. 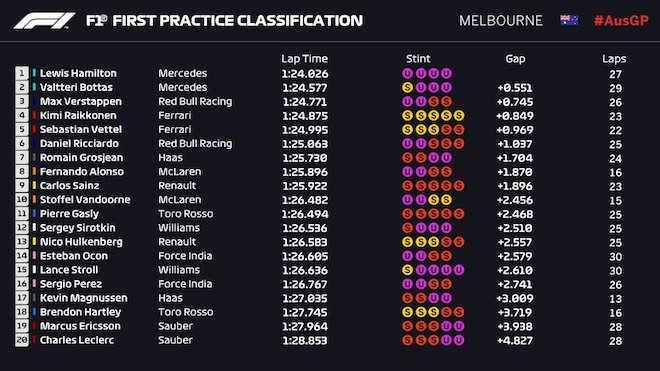