Trust and chemistry. Two words Monster Energy NASCAR Cup Series teams are bound to mention when talking about what makes a successful team.

When it comes to having genuine trust and chemistry between teammates, Front Row Motorsports might stand above all. David Ragan and Michael McDowell found it easy to relate to each other while trying to make things happen on the back end of the grid. Being in the same bible study class helped further the relationship along.

Children and carpooling to a Davidson, North Carolina, preschool have cemented the bond. Both drivers have young children similar in age – David and wife Jacquelyn have daughters Julia and Meredith, Michael and Jami McDowell two daughters, Emma and Rylie, and sons Trace and Lucas.

Ragan’s two children and McDowell’s three youngest attend the same school. Living close to each other, some days it’s not surprising to see the McDowell’s or Ragan’s grabbing an extra child on their travels.

“Tag team” is exactly what Ragan and McDowell do. During this interview in a conference room at the FRM’s shop, the two drivers easily and comfortably play off each other. When one finishes an answer or telling a tale, the other picks it up.

For instance, when talking about how their children get along and keep the families close, Ragan reveals a tidbit about how he and McDowell are “frugal” and “piggy-bag” off one another when it comes to birthday parties.

Continues Ragan, “My oldest and Michael’s youngest are a few days apart, so we’ll just have a joint birthday. All in one. We can split the pizzas and party favors.”

“Our wives were pregnant at the same time and they were friends during that time, too, so there’s an automatic connection because the kids were only a few days apart,” McDowell offers. “I think we’ve done all the birthday parties together.”

Similar stories will follow, but naturally the question of how this matters when it comes to Sunday had to be asked.

The off-track relationship does translate to on-track performance, McDowell believes. While both he and Ragan have personal goals they want to achieve, both are quick to talk about the bigger picture: bettering the organization.

What a pre-existing bond and trust does is make each happy for the other’s success, even if they themselves had a bad day. Take qualifying at ISM Raceway, where McDowell was disappointed in his 31st position but excited to see Ragan carry the banner with a 16th. Inner-team turmoil should not be a problem at FRM.

Ragan is in his fifth season with FRM and his second consecutive (he drove for the team from 2012 through the first race of 2015), whereas McDowell joined the organization this year. It has been the best-case scenario for both drivers, as Ragan gets a teammate he trusts and McDowell, well, he gets a teammate, which he had not had with Leavine Family Racing the last few years.

“A lot of it is the trust,” McDowell [below] says of how easy it has been to join FRM. “If I go ask David what he’s doing, he’s not going to lie to me. Where in the past there would be teammates that probably wouldn’t truthfully tell you what they were doing, because that’s what makes them good and what gives them that edge.” 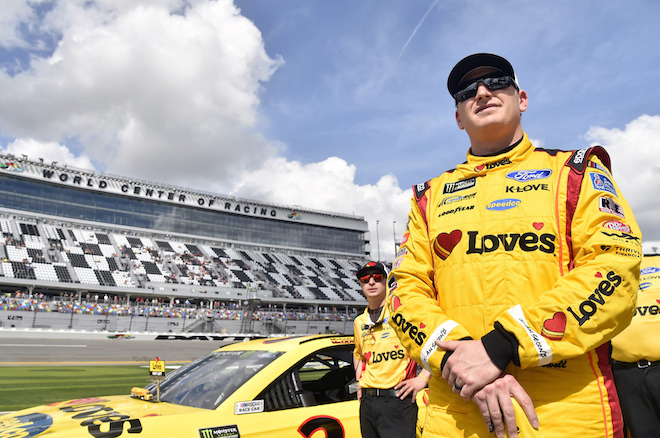 Ragan describes McDowell coming to the team as a natural fit.

“I feel like we might click together a little quicker,” he says, “and I think it’s important to have a respect off the racetrack because so often in our sport, drivers especially, egos get the best of us. We’re in a competitive sport where we want to win, we want to beat everyone, including our teammate and our best friends. It’s healthy to have that natural friendship outside of the track – we can check our egos and check some of our personal goals to do things that are good for the company.

“But at the same time, I was excited to have Michael as a teammate because of his passion and desire for racing, and his different background. He looks at things differently than I look at them, and even though we’ve been around the sport for a long time, we still learn every week. It would have been a little more challenging to get someone [here] I didn’t know or have a similar background to.”

Most interviews always had one predictable question about team potential and expectations. Most drivers offer the prepared response of contending for wins and championships. At FRM, an operation that has only been around since 2005, there is no speaking out of turn.

Bob Jenkins has methodically built his team up through the years, finding committed sponsors along the way and showing FRM worthy of an alliance with the championship-winning group at Roush Fenway Racing. Ragan also praises Jenkins for his personal financial commitment to the team.

This year, FRM took another major step getting manufacturer support from Ford. It translates to areas such as wind tunnel time, more resources and engineering support.

“Teams really don’t get better or win races and championships until they get manufacturer support,” says Ragan. “Getting manufacturer support from Ford was a big deal, and I think there’s more potential there down the road, but we’re still establishing our footing.

“It’s a slow process, but this is the hardest form of auto racing in the country, and maybe even the world. It’s been a fun ride. We’re not going to go to a championship-contending team over the offseason, but we can absolutely improve five to seven spots, and that’s our goal.”

In five short weeks, McDowell, statistically speaking, says there has been an increase in performance. Both he and Ragan have made the second round of qualifying (the top 24) in four of the first five races. Last season, Ragan qualified 24th or better in five of 36 races. The No. 34 car that McDowell drives did so only twice.

Why bring up qualifying? FRM marked it down as focus point for this season, and McDowell says qualifying shows the potential of speed while setting the tone for Sunday. Unfortunately, different issues have popped up to keep the duo from earning the finishes they’re looking for.

And realistically, what are those? Ragan and McDowell again feed off each other’s answers. 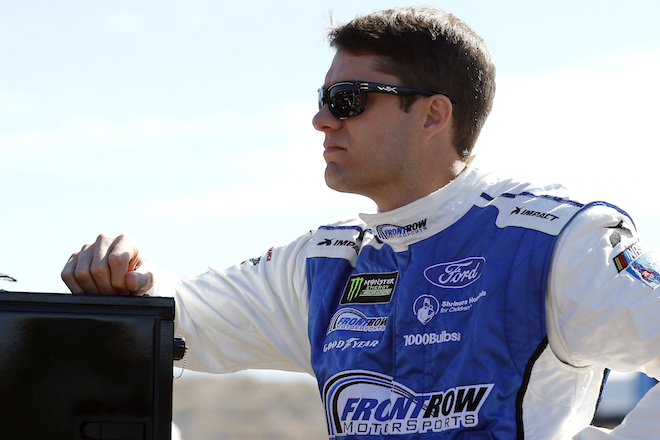 “Racing in the top 20 will give you opportunities at some good finishes, and I think more than anything it’s the steady progression. Being able to improve all season long and building some momentum and chemistry.”

McDowell has three top-25 finishes after kicking off the season with a ninth-place effort in the Daytona 500. Las Vegas was a breakout moment for the company when McDowell qualified 15th and had an equally as fast car in the race before stray debris went through the radiator.

Ragan has four top-25 finishes, his season best a 22nd at ISM Raceway. Ye he feels both teams have underperformed, and the moments of excellence that have been there were not capitalized on.

“We have a lot of untapped potential,” Ragan says. “I feel really good, even though we don’t have a win or top 10s to talk about. Our cars are a lot better and we should have better days ahead.”

Before the interview comes to and end there is one more family-related story McDowell wants to share about a time when David and Jacquelyn were out of town.

One more example of how the trust flows in and out of the race car.

“David’s mom showed up at the preschool dropping Julia off, and so, I was just checking on her as I was leaving and I could tell on her face there was something concerning,” McDowell begins.

It turned out, through the technology of a key fob, Beverly Ragan had been able to start the car at home and get to the preschool. But once there, the car would not start back up as the key fob was not near. McDowell took her home to get the key and then back to the school to retrieve the car.

Ragan laughs. “Even when we’re not here Jacquelyn will leave a list of emergency contacts, and usually Jami McDowell is number one on that list. Health concern. Help around town.”

“It was a fun drive,” McDowell chimes back in. “I got all the inside scoop of growing up, childhood and all that.”
“We trick or treat over at the McDowell’s house,” Ragan says. “So, we’re close. And I feel like even after racing we’re going to be friends and close, and it’s good to have friends like that in the communities you live in.

“Teammates are important and I think driver relationships are important [with] crew chiefs and engineers and everyone working together. But a lot of that starts with the drivers.”

OPINION: For what it's worth...