NASCAR officials are giving teams that have qualified at Auto Club Speedway the opportunity to start Sunday’s race on sticker tires.

Friday night, Monster Energy NASCAR Cup Series managing director Richard Buck told teams they could purchase a new set of tires to start the race on. Teams that elect this option will need to return the tires they qualified on to Goodyear.

The reason for the move is to even out the 37-car field.

Thirteen teams failed to make a qualifying attempt Friday night because of inspection issues. Those teams will start at the rear of the field. However, per the NASCAR rulebook of starting the race on the tires you qualified on, those teams missing qualifying would have sticker tires versus the scuff tires those who participated in qualifying would normally be required to start on.

“The first time through there was a lot of failures at all of the stations; it was basically kind of split between chassis, weight and measures and the body scan,” NASCAR senior vice president of competition Scott Miller said during qualifying.

“The second time through it seems the most of it has been centered around the actual body scan itself – honestly, this is the most aerodynamic track that we’ve gone to, so kind of no surprise they would be pushing the limits here more than some of the other places on that.” 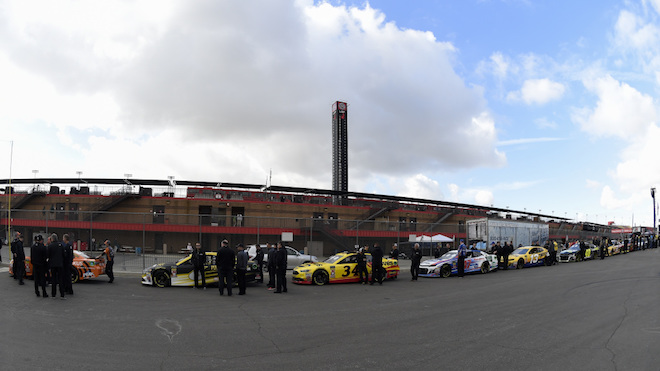 The disparity between those on scuff tires versus the teams on stickers did not go unnoticed. Kevin Harvick said after qualifying that those who participated in qualifying were being punished. Polesitter Martin Truex Jr., who did not qualify at Atlanta because of inspection issues, spoke from experience when saying having the sticker tires is a huge advantage.

Among those who did not qualify were all four Hendrick Motorsports cars. Jeff Andrews, the vice president of competition, said the issue for all four cars was similar and only described it as being in the rear deck lid area.

“We’ve got to go back, we have to talk obviously, internally, and talk with NASCAR,” said Andrews. “We felt like we were making changes in the area affected and just we were not seeing the results when we went back through.”