Ferrari has announced the acquisition of FIA deputy F1 race director Laurent Mekies, with the Frenchman set to join the team’s technical department in September.

Mekies has been with the FIA since October 2014, when he joined as safety director from Toro Rosso. Mekies has continued in that role as well as being appointed deputy F1 race director to Charlie Whiting (pictured at right, below, with Mekies) last season.

In a short statement, Ferrari announced that Mekies will start work with the team on Sept. 20 and will report to technical director Mattia Binotto. 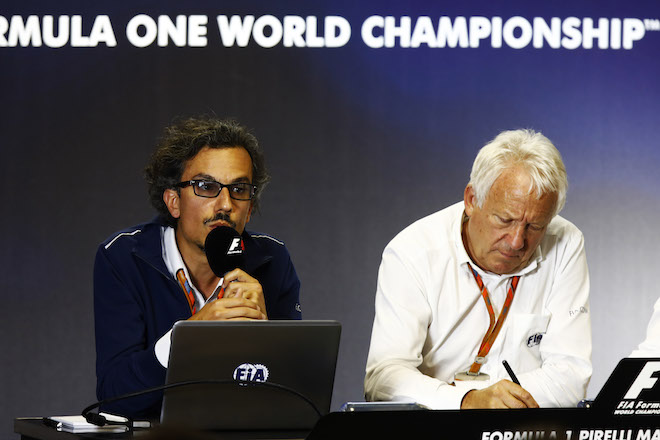 Having started work at Arrows in the early 2000s, Mekies moved to Minardi as a race engineer and remained with the team after its takeover by Red Bull saw it rebranded Toro Rosso. At Faenza, Mekies became chief engineer before finally being named head of vehicle performance until he left to work for motorsport’s governing body.

Confirming Mekies’ departure, the FIA said he will have no further involvement with F1 ahead of his switch to Ferrari’s technical team. He will continue as safety director, where he was central to the development and implementation of the Halo in a number of categories.

“After more than three years at the Fédération Internationale de l’Automobile, Laurent Mekies, FIA safety director and deputy to the F1 race director, is to leave the Federation,” the FIA said in a statement.

“Mr. Mekies joined the FIA in October 2014 as safety director, being responsible for all safety and medical matters for the Fédération Internationale de l’Automobile across all its championships, as well as R&D and homologation activities for both track and road.

“At the start of 2017 he was appointed deputy F1 race director in addition to his existing duties. In this capacity he worked alongside F1 race director Charlie Whiting throughout the 2017 F1 season, dealing principally with sporting matters.

“Until his departure from the Fédération Internationale de l’Automobile at the end of June, Mr Mekies will continue to act as FIA safety director. However, he will immediately cease all Formula 1 duties and will no longer be involved in any Formula 1 matter, stepping down from his role as deputy F1 race director with immediate effect.”