Trevor Carlin’s debut as a Verizon IndyCar Series team owner at St. Petersburg wasn’t particularly rewarding in terms of how both his drivers finished in the race. Max Chilton (pictured below) came home 19th after starting 20th, and teammate Charlie Kimball (above) followed an identical routine by improving one position, taking 20th after starting from 21st.

Although speed was lacking for Carlin’s Chevy-powered outfit, the same could be said for most of the other new teams and some of the veteran programs also searched for missing pace. From his vantage point, Carlin says outside of the results sheet, the team’s first showing in IndyCar had more positives than negatives to build from going forward.

“For us going into the weekend, we had to guess and imagine where we had to be with setup, so it was going into the dark, but now that we’ve done it, we can see what we need to do and will focus on some setup work in a couple of areas,” Carlin told RACER.
“But operationally, the crew were incredible. We arrived despite some delays with parts supplies, we presented ourselves well, we did every lap of every session, we were on time, didn’t have any screw-ups, had a ton of stull to learn, and I think we did well.

“Organizationally, my guys did an amazing job and now we just have to get some setup work done. We’re absolutely disappointed we didn’t do better, but with a day’s rest, we’re invigorated and ready to go again.” 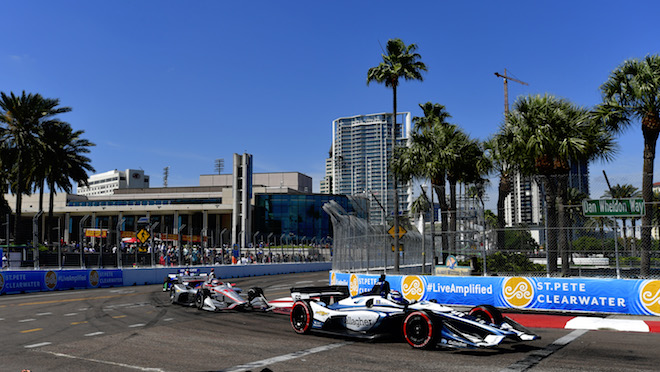 Having owned the European junior open-wheel market for many years, Carlin Racing embarked on its first American campaign in 2015 where Ed Jones promptly won on the team’s Indy Lights debut at St. Pete. A championship followed for Jones in 2016, and with the move to IndyCar, the Florida-based offshoot of Carlin’s UK squad has chosen to take on the biggest open-wheel series outside of Formula 1.

The learning curve, as Carlin acknowledges, will remain steep, but he isn’t worried about whether Carlin Racing will eventually move into a stronger competitive position.

“We’re realistic about where we need to go for now on, and it’s never going to be easy,” he added. “We had a hard time [at St. Pete], and there were other, older teams that were in the same boat. We’ve looked at the lap times, saw we had reasonable pace and were able to zone in on the areas of deficiencies.”

“We did the classic ‘go to Sebring, set your car up there, and find the setup didn’t work at St. Petersburg’ thing. We thought we were looking good leaving Sebring, and had to backtrack a lot when we got to the race. We learned a lesson there – Sebring’s a great facility, but it’s best for learning some things about the car and not others, as we found.

“Again, we’re disappointed because we wanted to perform better than we did, but we’re going to put in the work we need to achieve our goal and that starts at the next race.”