Schmidt Peterson Motorsports’ Robert Wickens led IndyCar’s seven-deep field of rookies in St. Petersburg on Friday, and there was nothing subtle about his Honda-powered performance.

The Canadian gave a glimpse of why the SPM team made the choice to hire the 28-year-old as James Hinchcliffe’s teammate after posting the seventh-fastest lap of the day (1m01.219s). It nestled his No. 6 entry between Alexander Rossi and Sebastien Bourdais on the combined time sheets.

“I’ve had a really good day,” he said. “You couldn’t ask for much more than to be top 10 in both sessions today. Hopefully that can be a trend for the rest of the weekend.”

Considering Wickens was just 0.2818s behind Hinchcliffe, who is entering his eighth season as an IndyCar driver, the all-Canadian duo is off to a promising start.

A.J. Foyt Racing’s Matheus Leist used the extra set of Firestone tires afforded to rookies to lead the first practice session, but fell backward in the faster second session with the No. 4 Chevy. The Brazilian placed 12th (1m01.4385s) overall on Friday.

“The whole day was pretty good, I think,” he said. “The first practice we were P1, so I was impressed with myself (laughs) and probably the team was, as well. It was a good start to the weekend, and I think the second session went good as well. We probably had a car to finish in the top five, but I just had too much traffic when I was on reds. P12 is still good I think. I’m looking forward to the weekend and the season. Probably tomorrow is going to be a better day than today, and we’re going to be up there with the top guys.”

Ed Carpenter Racing’s Jordan King was next among the rookies in 15th with the No. 21 Chevy. With his best lap (1m01.5579s) only 0.0074s slower than his more experienced teammate Spencer Pigot, the Briton was modestly pleased.

“There’s a lot more going on than just driving the car,” he said. “I’ve not driven any of these circuits before, so it will be a new experience each weekend. There’s always going to be learning, right up until the end of the season. I do feel comfortable within the car and driving it, which is a positive because the goal is to be as comfortable as possible as quickly as possible.” 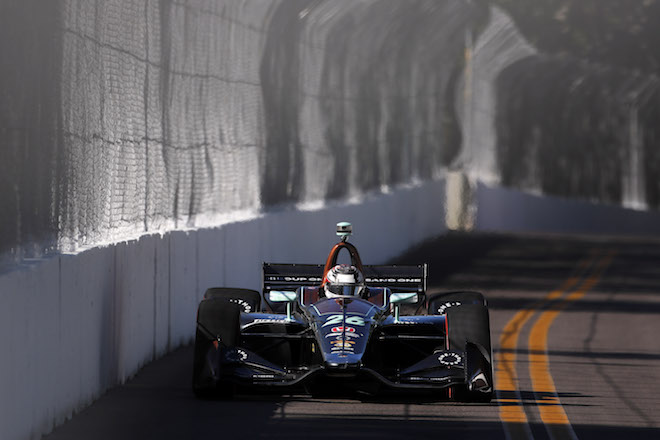 Veach believes his times in Saturday will be faster.

“We didn’t really get to show how good our car was,” the American said. “We got caught up in traffic all through the second session. It seemed like every time we put a set of tires on we seemed to run into someone on track. We’re happy with where things are. Obviously with [Andretti’s] Ryan [Hunter-Reay] being quick, it shows where our cars have some good pace.”

“I know where I need to get better, so I’m pretty confident we’ll be fine come practice tomorrow,” he said. “It’s really exciting driving on the St. Petersburg track aboard an Indy car. It’s a handful with the new universal aero kit, but I’m really enjoying it and I’m sure it’s going to be a really close qualifying and race for everyone.”

Harvey sees tying more corners together as the greatest area of improvement to pursue.

“There were areas where I was improving every lap and now I just need to put my quickest lap together,” he said. “Overall, I feel like it is a pretty solid start for where we want to be.”

Binder, who hails from Austria, had the most to digest on Friday after completing a single day of testing in an Indy car before the event.

“We ended the day on a positive note with valuable lessons learned,” he said. “I improved quite as the day progressed. My time improved substantially from the first practice today. We tried a new set up with more front wing, which did not work out for me. Ultimately, I lost it at the high-speed corner, but luckily there was no contact. We made a good step forward and we will see what tomorrow brings.”