Robert Wickens became the first rookie to score pole in his debut Indy car race since Sebastien Bourdais did at St. Petersburg back in 2003. And the Canadian wasn’t the only rookie to shine on the 1.8-mile street course during the Firestone Fast Six session.

Behind the Schmidt Peterson Motorsports Honda driver, A.J. Foyt Racing’s Matheus Leist (pictured below) will roll off directly behind him in third and Ed Carpenter Racing’s Jordan King took fourth as newcomers made the headlines in the run for pole. Sporadic rainfall presented another layer of complication for the three to deal with, and as a group, the trio out-performed many of the bigger names in the series.

“Once I got into the Fast Six, I was just driving for the passion of driving,” Wickens told RACER. “I already surpassed what I wanted to do. I love those high-pressure situations; I love those moments where it’s your last lap.” 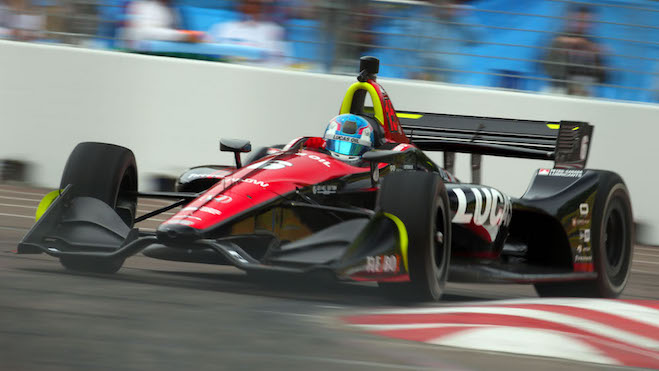 Wickens and Leist jumped forward in the Fast Six as the clock wound to zero, and for the Brazilian teenager, the result was a definite surprise.

“I think I was expecting to be like top 10, but definitely not top five, top six,” the 19-year-old Indy Lights graduate said of his Chevy-powered entry. “The team just did an amazing job, and very happy for the performance throughout the whole weekend already, and [I’m] looking forward to the race.”

For King, who led his group to open the first round of qualifying in his ECR Chevy, ending up fourth was a disappointment.

“It’s good, but I still think we should have been a bit quicker!” said the Briton, who turned to America after racing in the FIA Formula 2 series. “It was quite slippery at Turn 1, but I found quite a good way around there. Actually, at the back of the circuit, it was reasonably quite dry. Unfortunately, I almost went off at Turn 10 on my first push lap, so I came into there on my last lap a little bit tentative and looking at the times, that was the difference.

“But fourth, I can’t complain! I’m really happy. It’s all gone well – we’ve made some pretty good progress for my first time so I can’t grumble too much, but when there was potential to be a bit higher up, you can’t help as a racing driver but to want a bit more! I’m trying not to put too much expectation on tomorrow, we’ve got a good car, if I do my job I’m sure the rest of it will unfold quite nicely.”

Off Road 7hr ago ET