Scott Dixon broke up the Chevrolet parade at St. Petersburg on Saturday morning by putting his Chip Ganassi Racing Honda on top of the IndyCar timing charts with a lap of 1m00.7571s in the final dry run before qualifying.

Behind Dixon, it was all BowTie drivers as 2017 IndyCar champ Josef Newgarden checked in at 1m00.8654s and Team Penske teammate and four-time St. Pete polesitter Will Power was close behind at 1m00.8718s. They were the only three drivers too crack the 61s barrier on a cool, overcast morning.

Ed Carpenter Racing rookie Jordan King’s impressive session – which included a stint at P1 midway through – came to an end against the tire wall exiting the final corner with two minutes to go, but he still finished with the fourth-best time of 1m01.0321s in the No.20 entry.

Another rookie, Matheus Leist, wound up fifth overall in A.J. Foyt’s ABC Chevy with a lap of 1m00.0327s.

Simon Pagenaud, in the third Penske Chevy, was sixth-fastest at 1m00.0654s and Spencer Pigot gave Carpenter further reason to smile with the seventh-fastest lap of 1m00.0940s.

Alexander Rossi was the second quickest Honda and slotted eight overall with a lap of 1m00.1132s, while Andretti teammate Ryan Hunter-Reay, quickest on Friday, was back in 12th.

There were several close calls as drivers struggled to find balance with the new aero kits, wih Leist bringing out the first red flag of the session with an early trip into the Turn 4 runoff. 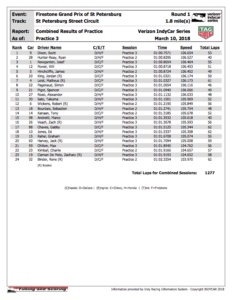