In the immediate afterglow of his pole position for Sunday’s Verizon IndyCar Series opener at St. Petersburg, Robert Wickens admitted to his surprise at besting series veteran Will Power in qualifying for his series debut. In fact, the Canadian admitted he hadn’t felt all that positive about his prospects ahead of qualifying, despite having shown strongly in practice on Friday.

“I didn’t feel that good, actually, in practice today,” said the new Schmidt Peterson Motorsports driver. “We kind of made some changes overnight that didn’t do what we hoped it would, so we kind of had to go back to our car from Friday. And Friday, I was really happy with the car. I was in the top 10 both sessions, sixth and seventh in the two, respectively, and I thought I left a lot of room for me to go quicker, especially optimizing the red tire. The first time ever using the red, I actually missed the peak of the tire, so for people who don’t know what that is, I basically just didn’t do the best lap when the grip was the best.

“But then today in qually, I learned from my mistakes and was able to put a good lap in Q1, which got me into the Fast 12, and from there it was just chaos – half wet, half dry. I like those conditions a lot. As a kid my whole career I’ve seemed to excel in that type of session, and thankfully the team and everyone on the Lucas Oil car did a great job getting us on track at the right time with the right tire, with the whole procedure. Hats off to them. I wouldn’t be here without them from the work that we’ve done over the winter to get me ready for IndyCar from having a great teammate beside me.

“There’s a lot of areas that led up to this, and thankfully I’m starting from pole position – way better than I ever expected my first IndyCar race to be, but I’m definitely not complaining!” 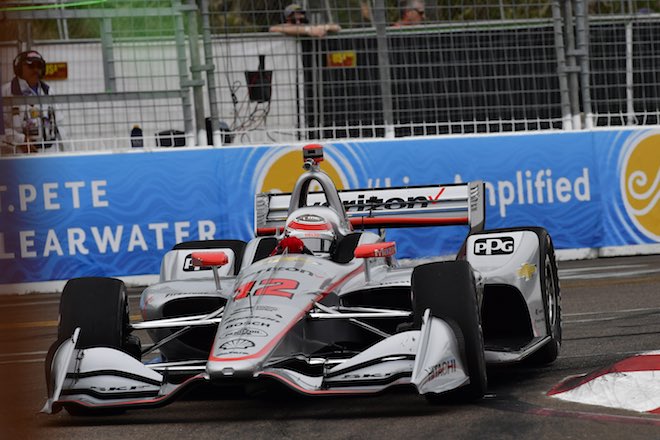 Power hadn’t felt too sanguine about his chances either at the start of the final session, and was surprised his best time held up as well as it did.

“I was so slow at the beginning. I was wondering if I’d just be sixth,” related the Team Penske racer. “But as the track dried, I got better.  I mean, the track was basically dry everywhere except for Turn 1 at the end, so I kind of expected a lot of people to be up there. It’s a very, very tight field. I was actually happy to be on the front row.

“Had a big mis-shift during my lap where I just got stuck in gear for quite a while, and then when I saw how tight it was… yeah, probably lost a tenth or so there. But yeah, fantastic job by Wickens, first time out, to get pole.”

Wickens said the presence of three rookies – himself, Matheus Leist in third and Jordan King in fourth – in the Fast Six at St. Petersburg shouldn’t be taken as a slight against the veterans, but more a combination of factors including the varying conditions as well as the new aero package.

“I think the 2018 package is one less disadvantage for a rookie; know what I mean? I can’t speak for the other rookies, but for me I’ve never been to St. Pete, where Will Power has had, what, seven poles here. But, temporary circuits change from year to year – new bumps appear, it’s all different from year to year, so your lines will change from time to time.

“You have to do the best job in the conditions that you have. But I don’t think in any way does rookies performing discredit the level of IndyCar. I mean, I think there’s a good crop of rookie drivers here. Matheus Leist has been in the top 5 in every single session this weekend. It doesn’t mean everyone else sucks, it just means he’s doing a fantastic job. And then if you look at Jordan King and his group in Q1, he was P1 over all, beating [Alexander] Rossi, beating everyone. Just the fact that I made it through that group, I was happy, and then I saw he was top of the charts, and I was like, good for him.”

Ryan Hunter-Reay agreed that series veterans have had to adapt their styles to suit to the new body kits.

“I think all the veterans had to dial it back a little bit from what they’ve been used to getting away with in brake zones on these tracks,” said the Andretti Autosport driver, who qualified sixth. “You can go to Sebring and test all you want and be similar to there, but once you get to a temporary street circuit like this, for the past three years, knowing what we’ve been able to get away with in the brake zones, the rolling minimum speeds and stuff like that, it’s definitely a different track and a different approach.”