Change was in the air for the first official practice session of the Verizon IndyCar Series season at the Firestone Grand Prix of St. Petersburg, as AJ Foyt Racing’s rookie Matheus Leist set the pace in the 45-minute session with a lap of 1m01.7231s in his No. 4 Chevy.

Cloudless but cool 61 degree conditions met the Verizon IndyCar Series contenders for the opening session, which was ruled from the start by rookies as Dale Coyne Racing’s Zachary Claman DeMelo and Andretti Autosport’s Zach Veach set the initial pace, although just eight cars took to the track in the first 15 minutes.

AJ Foyt Racing’s Tony Kanaan triggered the first red flag of the season by spinning off at Turn 4, having just risen to the top of the times in his No. 14 Chevy. But the Brazilian returned after the break still at the front of the times, where he stayed for much of the session.

James Hinchcliffe had a brief excursion into the runoff area but was able to continue in his ARROW No. 5 Honda, while Ryan Hunter-Reay also got into the runoff at Turn 4 but obviously had no resulting issue as the No. 28 DHL Honda subsequently vaulted to the front with eight minutes remaining, just ahead of Andretti Autosport teammate Alexander Rossi.

That held into the final minutes, when Leist surprised by moving to P1 with a lap 0.1581s better than Hunter-Reay’s best. Reigning race champion Sebastien Bourdais then made his move in the final moments, launching Coyne’s No. 18 into the second position with a 1m01.7719s. In fact, Leist wound up the only Chevy runner in the top seven as Chip Ganassi Racing’s Scott Dixon and another rookie – Schmidt Peterson’s Robert Wickens – followed Hunter-Reay and Rossi in the final tally.

Team boss Larry Foyt was cautiously excited about the speed of both his rookie and veteran drivers in the opening session.

“It’s just practice and it’s nice to have the extra rookie set of tires, which obviously helps out,” he noted of Leist’s late flyer. “But both cars look competitive and when you roll out against everybody for the first session, that’s what you hope for. It just feels good that all the work you put in over the winter is headed in the right direction. The thing is, you’ve got some very good drivers and very good teams, and they’ll go run their simulations and make their changes and you have to do the same to keep up with them.”

Rossi came away impressed with the freshened surface of the St. Petersburg street circuit, although he cautioned against making too many assumptions based on the initial session.

“I think they did a really good with the preparation of it,” Rossi said of the resurfacing. “It’s really clean. Other than that, in terms of the overall grip it’s really hard to tell…” 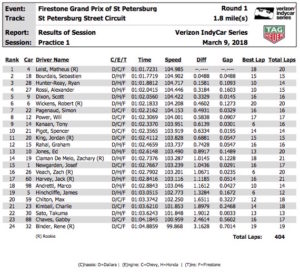