Kimi Raikkonen got within 0.04s of teammate Sebastian Vettel’s fastest time of preseason testing on the final day in Barcelona as McLaren endured a day of contrasting emotions.

Returning to the Ferrari on Friday after feeling unwell earlier in the week, Raikkonen followed a similar schedule to Vettel’s the day before and posted a 1m17.221s on the hypersoft tire in the morning session. That was followed by a race simulation – albeit one interrupted by an extra pit stop – as Ferrari completed strong mileage but again failed to match Mercedes’ long run pace.

While Raikkonen and Vettel were just 0.039s apart at the top of the combined times at the end of the test, it was Fernando Alonso in third who drew significant interest throughout the day. The Spaniard was frustrated to again stop on track with a turbo problem after just seven laps – parking the MCL33 in the exact same spot as he had stopped on Wednesday with an oil leak – but a quicker power unit change saw him back out in the afternoon session.

In the final half hour, McLaren opted for some performance runs on the hypersoft compound and Alonso duly set the second-fastest time of the day and became the only driver other than the Ferraris to dip into the 1m17s bracket. Alonso’s time of 1m17.784s was 0.6s slower than Vettel’s best; it was a welcome boost for the team, because although it recovered to record 93 laps on the final day it ended pre-season with the lowest mileage of all ten teams.

Alonso beat fellow Spaniard Carlos Sainz by 0.3s as Renault also ran the hypersoft late in the afternoon session, but the French constructor lost out on significant track time due to a gearbox problem, with Sainz limited to just 45 laps in total.

Behind Alonso and Sainz it was Daniel Ricciardo in fourth who posted a more telling lap time on supersofts. Ricciardo’s fastest lap of 1m18.327s was over a second off Raikkonen’s best but set on the supersoft tire, with Pirelli’s projections making it a tire-corrected 1m17.0s.

Ricciardo’s time left him just ahead of Romain Grosjean as Haas once again impressed, with the Frenchman within 0.1s of the Red Bull having used the ultrasoft tire compound, although his supersoft time was only 0.1s slower still.

On a productive day for most teams, Mercedes broke the 200-lap barrier and once again showed strong high fuel pace. Lewis Hamilton carried out a race simulation in the morning and ended up 11th fastest overall, while teammate Valtteri Bottas then added 104 laps in the afternoon and was sixth fastest overall on the medium tire. Tire corrected, Pirelli estimates the Finn’s pace to be capable of a 1m16.3s on hypersofts.

Toro Rosso finished its first preseason campaign with Honda in encouraging fashion as Brendon Hartley amassed 156 laps – the the fourth-highest total by a single driver on day four – and posted a best lap time of 1m18.949s on the hyper soft tire, edging out Esteban Ocon’s Force India on the same compound.

Although he posted a relatively competitive 1m19.118s on the hypersofts on the final day, Charles Leclerc was limited to 75 laps after he crashed during the morning session. The Sauber rookie went off and hit the wall at Turn 12 not long after Alonso’s stoppage, costing his team around four hours of track time.

Williams once again struggled toward the bottom of the times – with Lance Stroll slowest overall – as Robert Kubica opted to give up his morning in the car to the Canadian in order for the two race drivers to get more set-up time ahead of the first race in Australia. 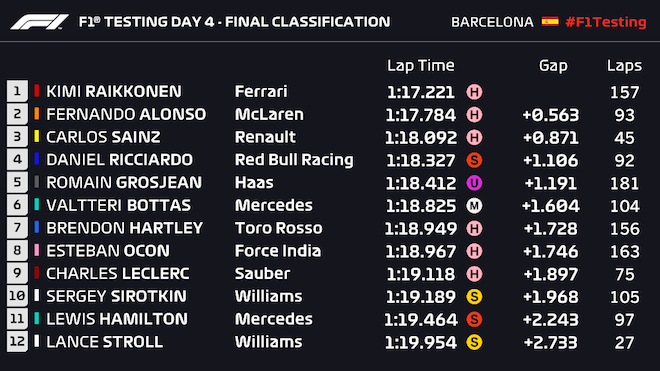