Sebastian Vettel posted a new unofficial track record during the penultimate day of pre-season testing in Barcelona but it was Mercedes that caught the eye with its race pace.

On his final day in the car before the first race of the season in Australia, Vettel lapped quickly on the supersoft tire in the morning session before switching to the hypersofts and registering a 1m17.182s with his Ferrari. That time was 0.9s faster than Red Bull’s Daniel Ricciardo posted on Wednesday on the same tire, and 1.178s clear of the Haas of Kevin Magnussen, although the Dane was on supersofts for his best lap.

While Vettel’s one-lap pace caused initial excitement, it was the longer run of Valtteri Bottas that provided a potentially telling insight into the likely pecking order this season. The Mercedes driver completed a race distance – albeit solely on medium tires – at nearly a second per lap quicker than the Ferrari managed, with Red Bull’s Max Verstappen also similar to Vettel’s pace on Thursday. 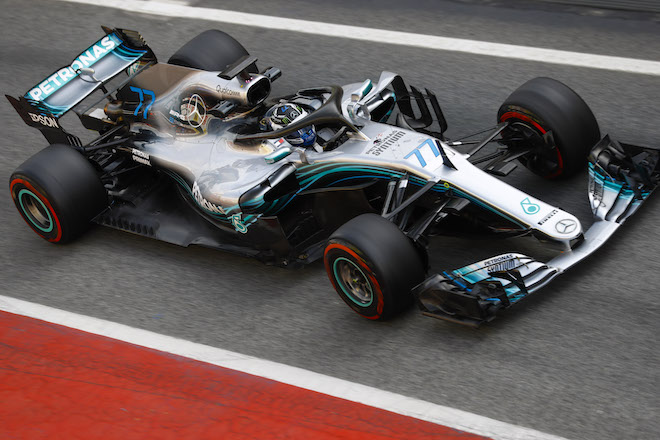 Bottas did his race distance during the morning session, markedly faster than Ricciardo’s long run pace on Wednesday, before handing over to teammate Lewis Hamilton for the afternoon. Hamilton similarly did a long run, with the Mercedes focus highlighted by the defending champion ending the day eighth on the timing screens, one position ahead of Bottas.

Mercedes will not show a directly comparable one-lap pace to Ferrari as it does not have any hypersofts as part of its testing allocation, meaning the ultrasoft is the softest compound available for any lower fuel running.

Pierre Gasly was third quickest as Toro Rosso again opted to do its performance running late in the day, ending up just 0.003s adrift of Magnussen but having used the hypersoft tire. Honda refuted claims it was running a new power unit per day as part of its testing program, with RACER understanding it has used a maximum of three over the seven days so far as it seeks to prove reliability. 162 laps for Gasly were encouraging on a day when every team comfortably exceeded 100.

Renault split its running between its drivers once again and was fourth and fifth quickest with Nico Hulkenberg and Carlos Sainz, respectively, both drivers running the hypersoft tire. There was just 0.05s between the teammates but they were 1.5s off of Vettel’s pace.

McLaren bounced back from its frustrating start to the week with 135 laps on Stoffel Vandoorne’s last day in the car, posting the sixth-fastest time as a result. Similar to Fernando Alonso on Wednesday, Vandoorne carried out plenty of early running on the hypersoft tire and his time of 1m18.855s was the team’s quickest of testing so far.

Marcus Ericsson was seventh quickest for Sauber – a little under 0.4s off Vandoorne on the same tire compound – but caused the only red flag of a productive day when he spun off at Turn 4 during a race simulation. Then came the Mercedes pair ahead of Robert Kubica, with the Williams reserve driver 0.6s quicker than Lance Stroll as the Canadian rookie took over the FW41 in the afternoon.

Although Verstappen ended his pre-season testing schedule in 12th place – ahead of only Stroll – he didn’t set a representative hypersoft time as Red Bull racked up 175 laps concentrating on race performance. 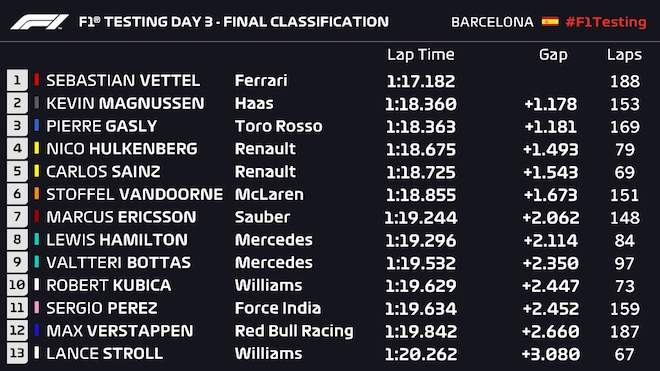