INSIGHT: Andretti's roadmap back to the top

INSIGHT: Andretti's roadmap back to the top

Andretti Autosport had two ways to process its 2017 season.

The first would be through a positive prism: a pair of victories were earned, including the biggest of all, the Indy 500, when Takuma Sato had a career-defining day at the Speedway, and then Alexander Rossi delivered his breakout performance in defeating Scott Dixon at Watkins Glen.

The other approach to contextualizing 2017, which is more in the direction where Andretti COO Rob Edwards falls, is that their four-car outfit won two races, but lost the other 15. Although it might sound excessively negative, it’s exactly how Edwards and the rest of the Honda-powered squad needed to digest the outcome—especially as they looked for ways to improve the win/loss record in 2018.

Rossi and Sato were the top performers in the championship after securing seventh and eighth in the final standings. Team veteran Ryan Hunter-Reay was an uncharacteristic ninth, and in his 12th season with the program, Marco Andretti was an unrewarding 12th in the points.

With drivers from Team Penske, Chip Ganassi Racing, and Rahal Letterman Lanigan Racing having finished ahead of the entire Andretti Autosport fleet in 2017, moving forward as a unit is the only metric that matters this year. Whether it’s winning the championship, or leapfrogging one or more of the teams that stand in their way, Edwards is expected to put the revised team – now with rookie Zach Veach in Sato’s former entry – squarely in the middle of the fight each weekend.

The question of how to get Andretti Autosport to the point where they have the other frontrunners are worried wherever they go also had two distinct sides. Where Schmidt Peterson Motorsports chose to blow up and rebuild core elements within their team, Edwards and Andretti’s leadership group appraised the men and women inside the operation and decided they had everything they need.

Building on the talent they currently possess is where Andretti expects to change its fortunes.

“We certainly all felt we made fairly significant improvements between ’16 and ’17, so I think the tone was to look at how we made those gains and to improve upon them, rather than thinking we needed to go a different direction,” Edwards told RACER. 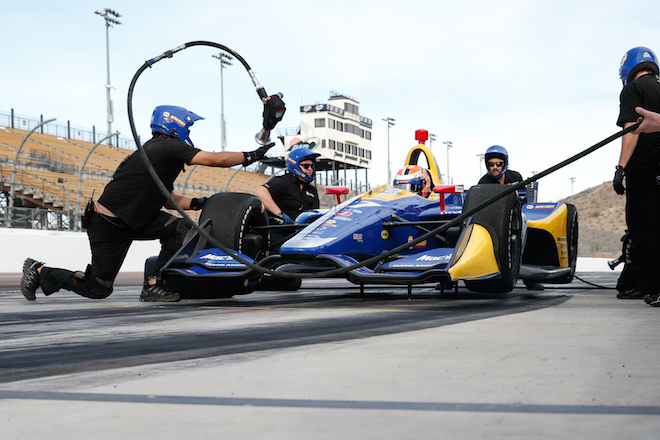 “Maybe between ’16 and ’17 we’re like, ‘okay, there are some things that we need to do differently’. I think in ’17, we found things that are working for us, and with a new type of car to learn about this year, we’re trying to incrementally build on what we’ve done with continuity. You make sure that the right tools are in place to learn the new cars as quickly as we are going to need to learn it, and start from there.

A restructuring within Andretti’s engineering department was the most significant alteration last season. Former Chip Ganassi Racing engineer Eric Bretzman was brought in to serve as the team’s technical director which, in turn, allowed Ray Gosselin to dedicate his full attention to engineering Hunter-Reay’s car.

It bought a healthy balance to that side of the operation, and with the driver/engineer combo expected to play an even greater part in how each team fares with IndyCar’s new bodywork, familiarity could be their greatest ally.

“We feel we’ve got the right people in the right places,” Edwards continued. “It wasn’t like we just came out of Sonoma and said automatically ‘this is what we’re going to do’. We’ve made sure we did our due diligence, and talked to everyone involved about what their desires, aspirations, strengths and weaknesses were, what worked, what didn’t work, but in the end, I think the opportunity to have a stable ship [was most important], [and we wanted to] capitalize on the fact that the chemistry’s had a year to gel.”

Hunter-Reay had a season to forget as a variety of maladies dampened his output. If there’s one Andretti entry that should have an easier time restoring its place in IndyCar’s pecking order in 2018, it’s RHR’s No. 28.

“Ryan is clearly quick,” Edwards said. “I think he and Ray clearly work well together, so the thought there is, if it isn’t broke, let’s keep doing what we know works, and the right things are going to come to pass.

“Whatever anomalies might have occurred last year, we can only prepare for different, and better outcomes this year. We’ve seen, because they’ve proven, how Ryan and Ray are such an effective team, and I would look for nothing less in the season ahead.” 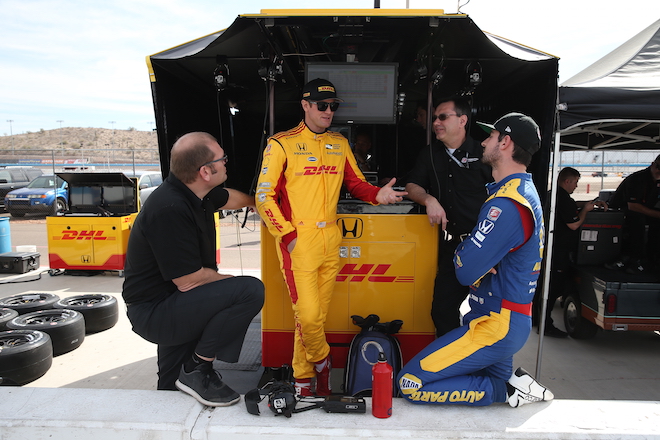 Rossi and engineer Jeremy Milless have given indicators that they could top Andretti’s internal hierarchy the end of the decade.

“Right from when Alexander first turned up at the beginning of ’16, I think we all saw a huge amount of talent there,” Edwards said. “We started off last year thinking, ‘yeah, we could win some races this year’ and early on, maybe we pushed too hard because we were stretching to get there. Crashing at Phoenix, things like that were really just… we all wanted it so badly, and maybe we were pushing too hard.

“But I think from Toronto onwards last year, getting that second place reaffirmed that we are capable of doing what think we are able to do. And from then on, I think we had a really, really good second half of the season.

“So, we’re through that. Now we expect to win, and we’re probably verging on the edge of being pissed off when we don’t win. So yeah, I think he can be a challenger for the championship for the next two or three years, and everyone that’s working on that program is very excited to have that opportunity.”

While RHR has the shortest trip to the front, Marco Andretti is charged with joining him inside the top 10. As he embarks on his 13th season as an IndyCar driver, Andretti has a prime opportunity to rewrite his narrative. A shift to the entry co-owned by Bryan Herta can only help, and with the reduced downforce all the drivers are forced to live with, Marco’s natural talent for staying on top of a lively car should fit his skillset far better than the high-downforce manufacturer aero kits.

Factor in the experience he and engineer Nathan O’Rourke have established as a tandem, and there are no obvious reasons for Andretti to languish in the mid-pack this season.

“I think the relationship with Bryan has got more headroom, for sure,” Edwards said. “I think the biggest challenge there is obviously, every year that the success that we all crave isn’t there, the weight on everyone’s shoulders just becomes greater. So it’s, how do you create an environment to just remind everyone that, hey, this is meant to be fun. We’re doing it because it’s fun. Let’s go out and have fun, and if we do that, the results will follow.

“The biggest shame of ’17 with Marco is, I actually think he went into the start of the year the best I’ve seen in my three years with the team. He was in a good place, and there was some things that happened in the first three or four races that, not wanting to go into details, but none within Marco’s control or the team’s control, took all that positive momentum away. So then suddenly, everyone’s back to putting a bunch of pressure on that shouldn’t be there, or doesn’t need to be there, to get the results. 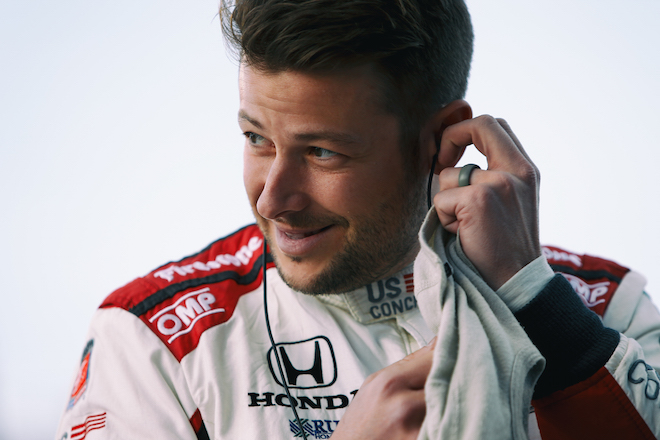 “I think there were a lot of gains last year. The fruits weren’t seen, but if we can come out of the box and get a foothold, then that positive momentum will develop quite strongly.”

The only entry where expectations are hard to set is that of Veach and Mothersead. Although the Indy Lights graduate is stepping into Sato’s Indy-winning program, success is not guaranteed. Edwards, however, has been impressed by the rookie’s work ethic throughout the offseason.

“Zach’s clearly smart, and he works as hard as anyone I’ve ever been around outside of the car,” he said. “If you look at Takuma’s group, any driver can’t help but benefit from having those pieces around them. Having all of that garage experience with the mechanics and Garrett’s nurturing nature… they’re certainly going to get the best out of Zach.

“If you look at the two races that Zach did last year, in neither case were they easy. He was thrown in the deep end at Barber, and Indy wasn’t a lot of fun, so I think we’re better off for the fact that he had those two races last year, and he has that knowledge and he knows what didn’t work, and that’s a bonus. He made progress every time he went out, but it wasn’t easy, and that can be a good thing for a young driver.”

Edwards believes the communal working style where all the Andretti drivers and engineers come together as a team in debriefs will be another boon for their rookie. Having a three-year contract also helps the situation for Veach.

“What better situation for a young driver than to have the three teammates that he’s got around him in a situation where the pressure isn’t, ‘hey, I’ve got to get it all done in the first year or else I’m not going to have this ride’,” he said.

“So many drivers that come out of Indy Lights, and it’s do or die, and that really doesn’t give them a chance to develop their craft and develop the tools. So between the timing stand that he’s got around him, his teammates, his nature, which is humble and wanting to learn, and the experiences that he’s had in the races last year, he’s got as good an opportunity as anyone could ask for to be successful.” 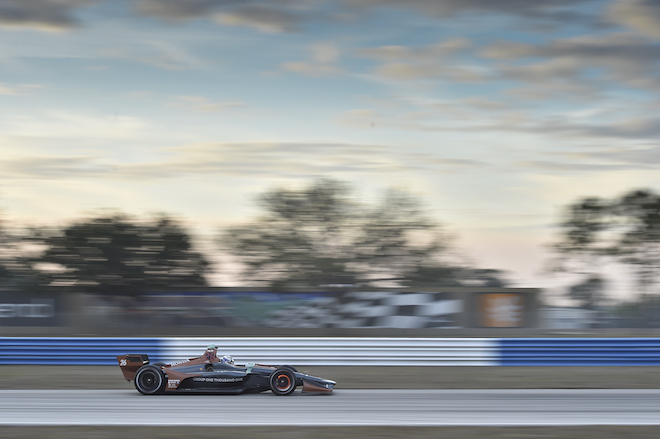