Daniel Ricciardo set a new track record at the Circuit de Barcelona-Catalunya on the second day of the final pre-season test while McLaren once again encountered reliability issues.

During a morning session marked by a number of quick lap times, Ricciardo set the pace with a 1m18.047s to register the fastest lap on the current circuit layout. The time was impressive but aided by the new track surface in Barcelona, and the fact that Ricciardo used the hypersoft tire to set his best time means it is Mercedes whose overall pace appears even stronger.

Lewis Hamilton was second quickest in the morning session; his lap time of 1m18.400s coming on the ultrasoft tire, which is roughly estimated to be in the region of 1.2s slower than the hypersoft. Hamilton completed 90 laps before handing over to Valtteri Bottas who ended the day third quickest, 0.160s slower than his teammate who also used the ultrasofts.

But the main focus was once again on McLaren, as Fernando Alonso missed out on nearly seven hours of running. After Stoffel Vandoorne’s problems on Tuesday, McLaren was keen to make up for lost time and managed 47 laps in the opening two hours before Alonso stopped at Turn 7 with a an oil leak, bringing out the red flag.

While the team was originally hopeful of a swift return to the track, it eventually needed to change the Renault power unit and estimated a three-hour delay to do so. In the end it was six hours and 37 minutes before Alonso emerged again, with the Spaniard fitting in seven further laps before Charles Leclerc spun off at Turn 12 at the end of the day to ensure that red flags ended any hopes of further significant running. Alonso’s tally ended up as 57 for the day, with three more possible due to practice start procedures.

The delay leaves McLaren with the least mileage complete in testing so far, with a number of teams breaking the 100-lap barrier on Wednesday. Ricciardo managed 165 laps while Mercedes racked up 175, but Ferrari – fourth quickest with Sebastian Vettel and ninth with Kimi Raikkonen – completed 105.

Ferrari would have likely completed more mileage but had to change its driver line-up at late notice due to Raikkonen feeling unwell. Despite completing 171 laps on Tuesday, Vettel duly drove in the morning session as a result, posting a 1m19.541s on the soft tire.

Alonso had posted a hypersoft tire lap time during the better of the track conditions in the morning that left him fifth-quickest for the majority of the day before Brendon Hartley usurped him in the Toro Rosso late on. Hartley registered a 1m19.823s to edge out the McLaren by 0.033s on the same tire, going on to complete a total of 119 laps despite losing some track time due to a spin and then stalling at the end of the pit lane.

Carlos Sainz was buoyed by an encouraging morning for Renault as he managed 88 laps and completed set-up work on the medium and soft compounds before handing over to team-mate Nico Hulkenberg in the afternoon. The strong work continued after lunch, with the pair managing 190 laps between them.

Aside from McLaren, Haas was the only team to fail to reach three figures in terms of laps completed, with Romain Grosjean finishing the day on 78. Grosjean was due to attempt a race distance in the afternoon after a solid morning, but an oil leak cost the team three hours of track time. 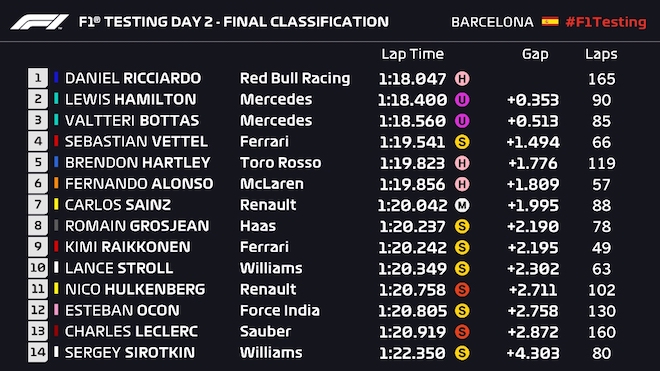