Kyle Kirkwood: On the right track

Kyle Kirkwood: On the right track

Reigning F4 United States powered by Honda champion and Team USA Scholarship driver Kyle Kirkwood faced some periods of uncertainty over the winter months but has bounced back to secure his favored option for 2018 – an opportunity to remain with Cape Motorsports and step onto the first rung of the Mazda Road to Indy by contesting the Cooper Tires USF2000 Championship Powered by Mazda.

Hello everyone, I’m back after a long but extremely busy offseason. Last time I wrote to all of you was just after my trip to Paris for the 2017 FIA Prize Giving Ceremony, which was one of the most incredible experiences in my life thus far. Since then it’s been very tough and sometimes confusing planning out what I was going to run this season. The Mazda Road to Indy Presented by Cooper Tires was at the top of my list for options and I put all my efforts into making sure I was in the program somehow.

This was always the goal, but circumstances throughout the winter almost made it impossible; that’s really where the confusion came from. Fortunately, the stars aligned and I have been able to confirm my plans for the season to remain with Cape Motorsports and move into the Cooper Tires USF2000 Championship Powered by Mazda.

The past four months have really flown by. I have spent every weekend, minus maybe three, at a racetrack, mostly at the karting circuits. I tend to spend my “free weekends” throughout the year coaching a handful of up-and-coming stars in karting with Speed Concepts Racing run by Mike Speed (father of Scott Speed). My drivers range from 10 to 13 years old and they never fail to put a smile on my face. I always like giving back the same way many have to me in the past. There is no way to explain how great it is to know you have so much to do with a young driver’s progression. One of my younger ones that I have helped since he started is now contending for wins against some of the best karting drivers around the world in his category. Next to me winning, watching these youngsters win comes in a close second! 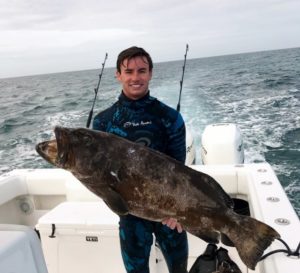 Happily, there has been some time where I can relax with family and friends. I spend as much time as I can free-diving and surfing, most of the time with Oliver Askew and Logan Sargeant. It’s a couple things we’ve done since before we even started racing. Even before I could walk, my parents would take me out fishing and strap me into a child car seat! So, obviously, a part of me will always love being on the water.

Getting back to what is happening currently, we recently ran our first test as a team at Homestead-Miami in Florida for the Mazda Road to Indy “Spring Training” official test. Even though everything was very last-minute and it was only our first test, I still had confidence we would turn some heads. I believe we did just that throughout the weekend with multiple fast laps while also being quickest overall both days! All in all, it was a stellar weekend and it was honestly the most perfect debut Cape and I could ask for. 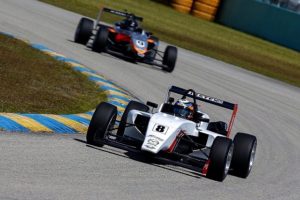 It’s pretty amazing, actually. Even though everything is absolutely different outside the team compared to last year, everything still feels the same due to the relationship I have built with the team from winning the F4 U.S. Championship powered by Honda. Coming into the weekend it felt as if we started exactly where we left off October of last year…on a big high note from our race win and championship victory at COTA during the USGP Formula 1 event.

The start of the weekend was pretty funny to say the least. We snatched some Cooper tires at the track from another team, not knowing how old or how many laps they had on them… All we knew was that there was just a big “X” across the tops of the rubber, which typically means “these are finished.” Actually, we just needed something the run on for the first of three sessions since our plan was to run our daily two-set allowance in the final two sessions. The first session was only to make sure everything ran properly and there weren’t any prevalent issues.

Sessions two and three went as planned. The team did a fabulous job and the car was really dialed in and we were quickest by 1.3504 seconds in session two and 0.2203s in session three! I couldn’t be happier with those results. We proved what we needed to and there wasn’t anything noticeable on the car that needed to be assessed for sessions four, five and six.

Day two was solely to improve our own knowledge of how the car reacted in qualifying/race distance stints, with some minor fine-tuning here and there. All went according to plan again. We ran some fast laps and concentrated on overall consistency with used tires, so we learned exactly what we needed to and I couldn’t have hoped for anything more from the car.

Now preparations start for St. Petersburg on March 9-11, our first official race and one of two street races we will compete on this year. This will be my first time racing a temporary track in cars, so learning quick will be crucial.