As far as folk heroes go, Ryan Blaney might not come to mind. But the 24-year-old is one of the best things NASCAR has going for it right now.

In short, Blaney is young and talented. Off track, he is quickly becoming a magnet for fans who don’t like vanilla drivers and enjoy seeing a driver’s personality flow through digital media. Take, for instance, Blaney’s follow-through on an impromptu plan for a pizza party in the grandstands during testing.

Between making runs in the @Team_Penske 12 Ryan @Blaney made good on his promise to eat lunch with the fans at the tire test today. pic.twitter.com/5A8RqE2GAg

And let’s not forget about the podcast.

Yes, Blaney has a podcast, called “The Glass Case of Emotion.” No topic is off limits. Alongside NASCAR.com’s Chuck Bush and Motor Racing Network’s Kim Coon, the strong language and mature content label are a good indication of what listeners are in for. Somehow though, Blaney ended up surprised at the reception to the podcast.

“I enjoy doing it,” he told RACER. “However many guest we can get – I like to get people from other sports or musicians and stuff like that. But I think it’s really cool that you just go and be yourself and talk about some funny things and people like it, so that makes it fun.”

For someone who considers himself an introvert, Blaney’s openness is somewhat newfound. The instinct to connect with fans kicked in only two or three years ago, but Blaney’s had an idea of what to do since childhood.

Dad Dave has been his role model. Young Blaney gushed over the weekend at Atlanta Motor Speedway about how his father was “really good” about giving time to the fans, and it wasn’t hard to pick that up.

“I honestly talk more with fans than I do other people,” Blaney says of himself now. “I think the more you’re around this sport and the older that you get, you appreciate the time and commitment that these fans have, that these people have to bring their families out to the racetrack. They don’t have to come. They can stay home and watch the race, but they want to bring their families out, they want to enjoy the race and they don’t have to be a fan of you.

“They don’t even know you, but they’re a fan of how you drive or how you are off the track, so I feel like if you get to meet them and get a little bit more of your own personality to them that it’s the least we can do to appreciate everybody.”

One of my favorite photos from today. This is what makes @Blaney a favorite among many. pic.twitter.com/5z26UzaHqQ

Blaney isn’t afraid to admit there are still things that make him nervous, although it’s usually an obligation away from the track, like appearing on a television show. At his home base, which he considers to be the track, Blaney goes into “make the fans comfortable” mode.

Here might be a good time to set the record straight: Team Penske is not the “no-fun team.” Sure, Blaney cut his hair coming into this season, ditching the long flowing locks and facial hair.

“It’s a different atmosphere and that’s what Roger Penske built,” said Blaney. “He’s someone who has a reputation of looking a certain way and that’s what he’s done in his career, and what his drivers are encouraged to do. We’re still the same people, we still have fun. It’s not locked up corporate.

“Yeah, the hair has changed and stuff like that, but that’s just external. I feel like the humor side is internal. Me, Brad [Keselowski] and Joey [Logano] have the most fun out of a lot of people. No, I don’t think it’s fair that Penske gets that bad rap.” 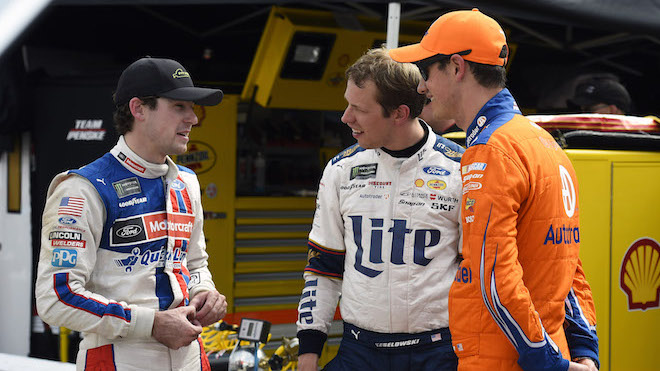 On the flip side, Blaney’s humor and willingness to share is not for everyone.

Social media is where Blaney really makes his mark, with Twitter being a space where posts about racing seem secondary. From Star Wars to music and adventures all around the world, Blaney is an open book. Too open for some other organizations, who have used his social media presence as an example to their drivers of what not to do – such as use #drunk in a tweet.

“There are some dos and don’ts of what to put out there on social media and how to be, but I did think that was kind of funny at Hendrick that they told [Alex] Bowman, most of it was [examples of] me, of the don’ts,” Blaney said. “I’m like, well, I don’t really do that bad of stuff on social media. I kind of have the rule that if I have to think about it twice then I don’t do it and I’ve had that a few times. Whether that’s getting into it with somebody or just putting something out there.

“But I did do that [#drunk] one, but I was on vacation so it doesn’t matter. I feel like the more genuine you are and the more yourself you are on social media, to a limit, the better.”

Having said all this, it’s easy to assume big things are in Blaney’s future. While it might not be in the form of a most popular driver award, the man who has owned such a category, Dale Earnhardt Jr., is no longer around. And what made Earnhardt likeable was his relatability, accessibility and an appeal that made it easy to cross-market into other mainstream areas.

There will only be one Earnhardt Jr., and when this comparison is pointed out to Blaney he chuckles and says the same thing. But Blaney does have the same variables needed to become a star.

“I don’t really try to be like that, it’s just how I am and luckily people like it, and if they don’t, then they don’t,” he said. “I just feel like the more you can be you and just do things that you would do if you weren’t racing, it’s just [showing] who you are. Luckily people enjoy that side of it, and it’s nothing I really try at.

“Dale made a good name for himself just being a genuine, cool guy and the more yourself you can be and not be a robot, I feel like people like that. Just try to be yourself is the best thing you can do.”

It’s certainly working, and in a sport that needs new heroes to push going forward they’ve had one waiting in the wings.