Michael Shank must own the record for the longest span between purchasing an Indy car and hitting the track to turn his first laps as an IndyCar entrant. Shank’s Ohio-based squad was among the first to buy a Dallara DW12 when the new model was announced in 2011 and took delivery of the car in January of 2012 (pictured below)…after which it sat, for months, as a competitive Indy 500 engine lease proved impossible to secure.

His original, unused DW12 chassis was eventually sold in 2012, and with a new Michael Shank Racing-owned DW12 finally in his hands, the strange, six-year journey toward fielding a car of his own will reach the finish line on Tuesday. 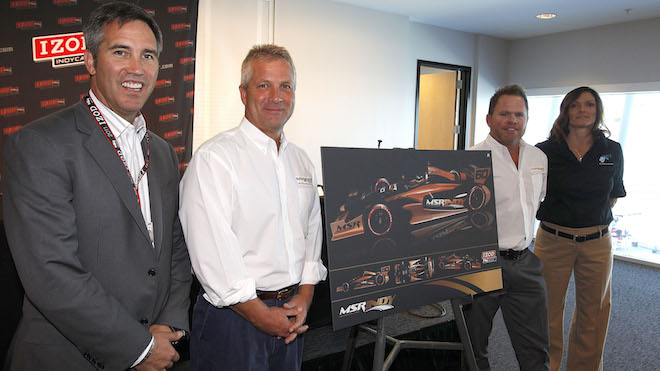 “At last, we’re going testing with a car of our own!” Shank told RACER. “It’s a very surreal thing to see it on the setup pad here in Sebring. We had the false start in 2012, but that’s finally getting buried in the past. This is pretty satisfying.”

The open-wheel and sports car racing team owner will contest six rounds with Jack Harvey driving the No.60 Honda in a technical alliance with Schmidt Peterson Motorsports. Unlike MSR’s Indy 500 debut last year using leased equipment in a partnership with Andretti Autosport, Shank’s team will run the new car on its own. The relationship got off to a good start as MSR and SPM personnel came together to built the 2018-spec car at SPM’s facility in Indiana.

“They helped and it was both of our sets of guys working together on it,” Shank continued. “Instead of doing it on our own, we had immediate reference on the build to get the car up and going since the SPM guys have already been out for multiple tests with the ’18 spec.”

Most of the Verizon IndyCar Series field will spend Tuesday and Wednesday testing at Sebring. As other teams have experienced during pre-season testing, caution will play a small role in the shakedown and initial running for Harvey in the No.60.

“It’s tricky with Dallara delivering the new bodywork because everybody is needing stuff; we’re still borrowing a few parts and pieces to go run, and there are no spare front wings, so we’re just going to be smart about it,” Shank  said.

“We’re going to do both days, then stay down here and do the following Tuesday – race week at St. Pete – to do ins and outs, pit stops, and really get ourselves prepped for going over the wall and maximizing Jack’s part leaving and hitting the pits. It’s all my guys from IMSA crewing the car, but a lot of them come from IndyCar so it shouldn’t be a total surprise.”

Shank is also looking forward to SPM race engineer Will Anderson and Harvey getting down to business with the season opener less than two weeks away.

“Will was Justin Wilson’s assistant with Bill Pappas at Coyne, so I know him through that affiliation, and he deserves to get a shot running our car because he’s very talented,” he said. “We have five days budgeted for testing and we’re going to burn three right now because it’s that important to de-bug and get ourselves as ready as possible.

“The good thing is we’re not all new to each other; I’ve known Sam Schmidt forever and Jack was part of Sam’s team for a long time coming up the ladder system, so I’m cautiously optimistic about what all we can achieve together. And I’m trying to be realistic with our goals. All I’ve asked my guys is to improve every time the car rolls out of the trailer. If we can do that, which I know we can, we’ll be in good shape.”